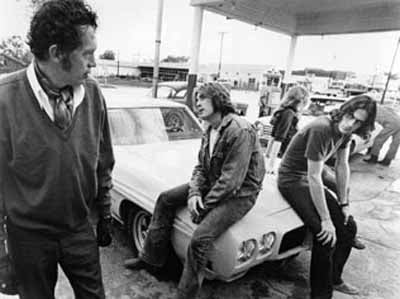 Two-Lane Blacktop just might be the greatest car movie ever made. This quiet, anti-narrative, masterpiece, and bonafide cult classic is the best of the ‘existential road-trip’ movies, and one of the greatest American films made in the early 70’s. As the pinnacle of director Monte Hellman’s career, it ages better with time. As much as Monte Hellman’s 1971 road movie will forever be associated with Easy Rider, it also springs to mind Dirty Mary Crazy Larry and Vanishing Point. But unlike those two films, Hellman is less interested in allegory nor in the race itself. Hellman is interested in the process whereby a passion is subtly transformed into an obsession – and as a study in obsession and emotional dislocation, Two-Lane Blacktop is in a league of its own.