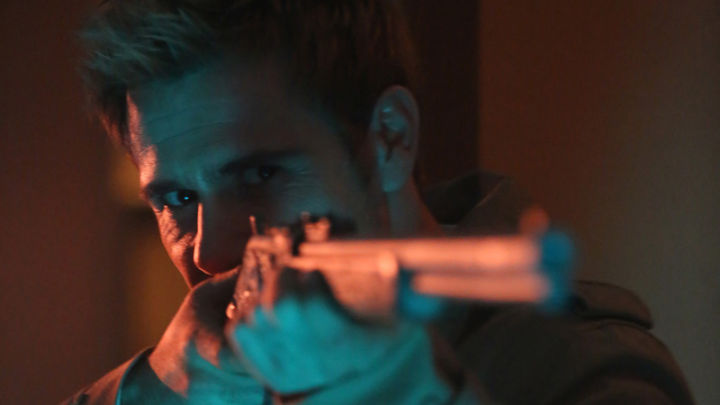 Even though it is riddled with plot inconsistencies and even some slasher film/supernatural show cliches, Constantine starts to find itself as a show in its final three episodes as it embraces being a mythology lite, episodic show with a few season finale reveals and plot threads that could expand its universe and heighten the threat level of the Rising Darkness from being a silly name that occasionally, almost does something bad every other episode. But its biggest strength going forward is its small, morally ambiguous ensemble cast that really benefited from showcase episodes like “Quid Pro Quo” (for Chas) and “Angels and Ministers of Grace (for Zed and Manny) down the stretch. If it continues (either on NBC or as SyFy’s Hellblazer), Constantine has a solid foundation with these characters and actors along with sense of atmosphere and setting in most episodes. 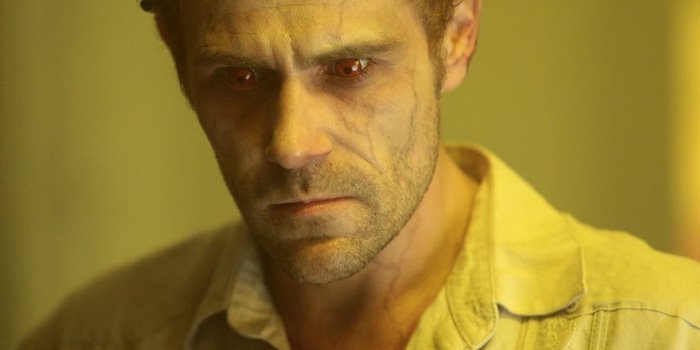 Beginning directly after the gut-wrenching ending of the midseason finale, ” The Saint of Last Resorts Part 2″ takes one of the series’ biggest risks yet, by having John Constantine (Matt Ryan) literally bond with a demon to save his life after his old lover Anne-Marie (Claire van der Bloom) shot him because she wasn’t willing to have him sacrifice another innocent to save his skin. Constantine’s new status quo is riveting as, possessed by the Assyrian hunger demon Pazuzu, John slaughters members of a pretty scary Mexican gang and gets thrown in prison, where Chas (Charles Halford) and Zed (Angelica Celaya) must enter and exorcise the demon, or kill him if all else fails. There is also the “Rising Darkness”, but over the course of the season, this have become laughable, even if a big name is thrown in this episode. This inconsistency also extends to the characters of Manny (Harold Perrineau) and Anne-Marie, as writer Mark Verheiden possibly uses the former as an example of Heaven’s impotence in the coming struggle (Constantine’s theology and cosmology is becoming sketchier by the episode) and the latter where the plot dictates. There is also a slight dip in the special effects after the heights of the fallen angel a few episodes back. 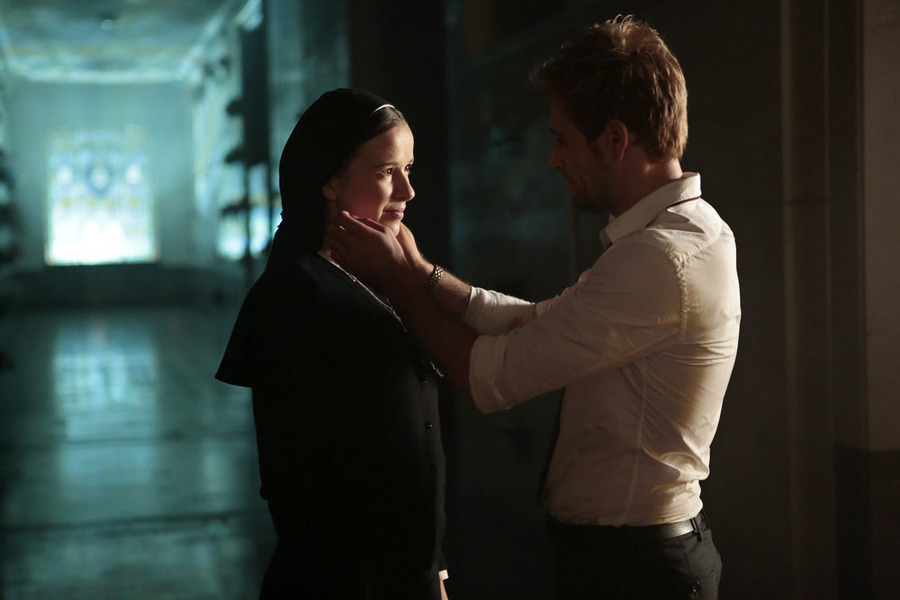 “The Saint of Last Resorts” breaks the mold of a lot of previous Constantine episodes, which partially set up the character of John Constantine (Matt Ryan) as some kind of cynical, occult superhero instead of the hell-bound bastard and con-man from the Hellblazer comics. Instead of having Constantine initiate the case of the week with Zed’s (Angelica Celaya) scrying, this time he gets a call from his magic tutor, old flame, and member of the Newcastle crew Anne-Marie (Claire van der Boom), who has seen a baby snatched by a supernatural force. Because this is personal, John leaves Zed on her own at the House of Mystery, giving her first solo plotline to show how she has grown as a character, along with revealing a new threat other than the vague Rising Darkness. Director T.J. Scott uses the convent, landscapes, and graveyards of Mexico City to give “The Saint of Last Resorts” a real sense of atmosphere and writer Carly Wray mines world mythology and the Hellblazer to craft a primal horror plot as well as cementing once and for all that Constantine is vulnerable, charming, and occasionally funny, but not a hero. 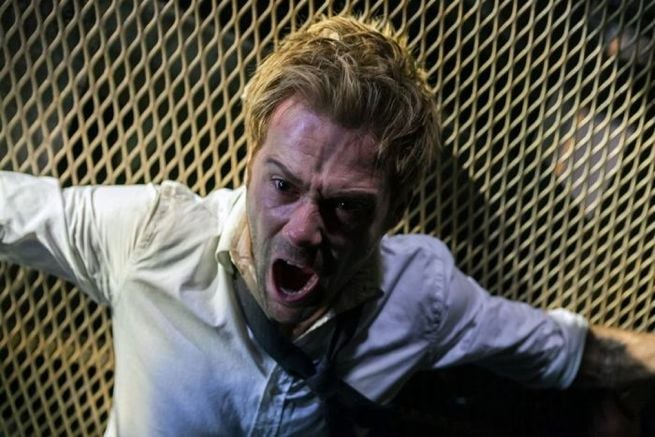 The character of John Constantine is rooted in music as much as he is in magic or being a con artist. Before he was master of the dark arts, he was the frontman for Liverpool punk outfit Mucous Membrane. (Which gets a much needed shout out in this episode.) Even before he was fully fledged and named character, he was a guy in the background of Swamp Thing #25, who artist Stephen Bissette wanted to look like Sting. But enough of the origin story stuff. “The Devil’s Vinyl” is the strongest episode of Constantine to date as David Goyer and Mark Verheiden construct a plot filled with the trickery, double crosses, soul bartering, and exorcisms that were the Hellblazer comic’s stock and trade, especially during Garth Ennis’ run. The threat level is also upped thorough developing the show’s mythology by including voodoo priest and crime kingpin Papa Midnite (played with presence and a spot-on accent by Michael James Shaw) and hinting at a character that will make Hellblazer fans shake in their boots. With this threat escalation, Goyer and Verheiden start to dig beneath the surface of John Constantine (Matt Ryan), Zed (Angelica Celaya), and Chas (Charles Halford) while giving them active and pivotal roles in the plot. 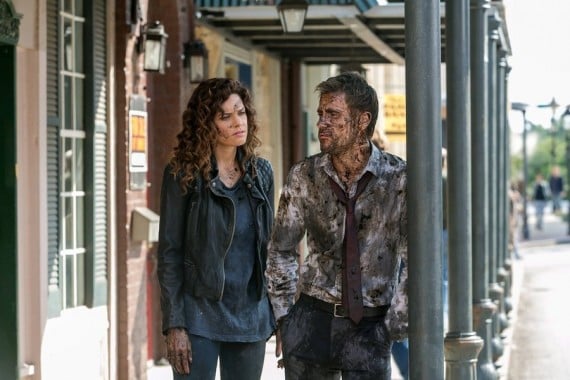 With all the exposition and origin story trappings out of the way in last week’s pilot, “The Darkness Beneath” show readers what exactly John Constantine (Matt Ryan) does, other than con people, go to pubs, and chat with Chas (Charles Halford). This could be a typical case of the week type of episode, but writer Rockne S. O’Bannon manages to connect the monster to John’s past life, as well as some of the socioeconomic critiques that characterized early Hellblazer issues. He also introduces a new, improved female lead in Zed Martin (Angelica Celaya), who has an almost sultry chemistry with Constantine, and shows she can handle herself in a fight with the supernatural and then some. O’Bannon also doesn’t reveal his entire hand when it comes to her character, and the mysterious nature of her powers and connection to Constantine will be a intriguing mystery to follow throughout the season. “The Darkness Beneath” showcases Constantine as more of a con man than a pure spell caster, as well as someone who uses others to further his ends, even though they are positive in this case. He’s no hero. A few criticisms of this episode are that the citizens of the town exist as ciphers to move the plot, including a skeptical preacher (James Le Gros) who has some substantial screen time, and the director’s focus on pyrotechnics instead of terrifying imagery and chills.