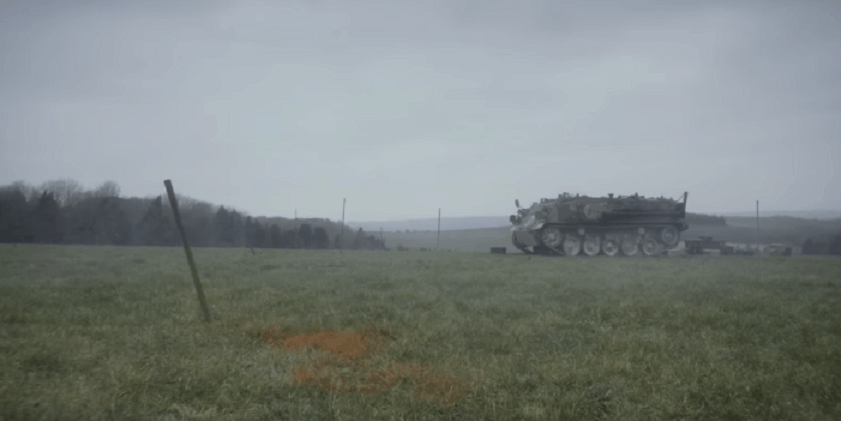 The first trailer dropped today for Tank 432, a new horror thriller written and directed by Nick Gillespie and produced by Ben Wheatley. Wheatley’s name has been attached to a lot of interesting projects in the last few years, including the incredibly well-received Kill List the upcoming and sure-to-be-well-received High Rise. Gillespie served as camera operator on High Rise, and camera assistant on Kill List before that, and if he’s picked up anything from Wheatley along his journey towards directing, we may have something here.

Tank 432 (Known as Belly of the Bulldog) certainly looks like it could wind up being a favorite for horror/thriller fans this year, as the trailer paints a picture of a bleak, psychologically punishing little thriller. While on a rescue mission, a team of soldiers come upon the scene of a grizzly massacre, and come under attack by a mysterious enemy. The team take shelter in an abandoned tank and, by the looks of things, some scary, mindbending stuff follows. What’s interesting is that, a lot like Kill List, we may spend a lot of Tank 432 not entirely sure if what’s going on has any kind of paranormal element. The unseen figures pursuing our protagonists certainly seem like they may have an element of the unusual about them, and once the crew enters the tank, things start to get even weirder. Is the tank full of psychedelic fumes? Are they being pursued by some kind of apparitions? If you freeze-frame the trailer you can see what looks like a Star Wars alien menacing Michael Smiley, but is that just a hallucination? One of the blurbs, from Sight and Sound’s Anton Bitel, calls the film “A heady mix of Dog Soldiers and Jacob’s Ladder”. If that endorsement is even half true, sign me up.

Check out the trailer for Tank432 below.