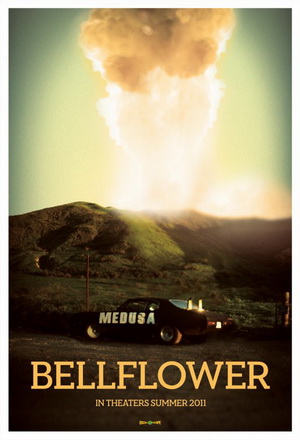 Bellflower was one of those films that garnered a ton of attention at Sundance earlier this year, but we haven’t seen any photos or images from the movie until now. The film was written, directed, produced and edited by one of it’s stars Evan Glodell, and made on a shoestring budget in Ventura, California. The film which premiered at the Sundance Film Festival tells “the quirky story of two guys, who build flamethrowers and other weapons in the hope that a global apocalypse will occur and clear the way for their imaginary gang” called Mother Medusa.

The film was praised for its unique look. Apparently they designed a camera, which “uses various vintage camera parts, bellows and Russian lenses, around the Silicon Imaging SI-2K Mini Digital Cinema camera”. What does that mean? I have no clue, but the following YouTube video explains it all.

Bellflower follows two friends who spend their time building flamethrowers and other weapons in the hope that a global apocalypse will occur and clear the runway for their imaginary gang, Mother Medusa, to reign supreme. While waiting for the destruction to commence, one of them meets a charismatic young woman and falls in love—hard. Quickly integrating into a new group of friends, the pair set off on a journey of betrayal, love, hate, and extreme violence more devastating than any of their apocalyptic fantasies. With highly stylized photography and editing, Bellflower is an exhilarating, character-driven joyride. Fueling this narrative with fantastic imagery and extraordinary performances, writer/director/actor Glodell elevates the ordinary experiences of friendship and romance into the stuff of legend.

Watch the teaser below: