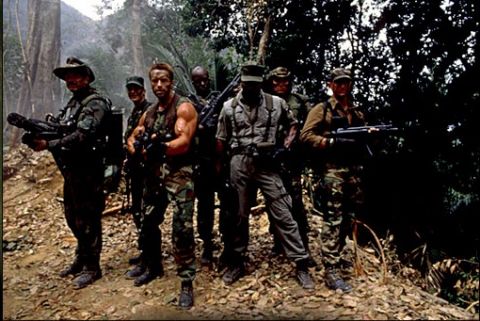 Hollywood’s lining up to be hunted!

Adrien Brody is on board to star in Robert Rodriguez’s Predators, the latest installment of the popular sci-fi franchise, which he will direct. Topher Grace is also in negotiations to join the action-adventure movie, along with Alice Braga (I Am Legend), Mahershalalhashbaz Ali (The 4400), and Walt Goggins (The Shield). Meanwhile, Rodriguez mainstay Danny Trejo and UFC fighter Oleg Taktarov have confirmed their involvement.

The script, written by Rodriguez and Alex Litvak, follows a group of elite warrior-types who are being hunted by members of a race of merciless alien trackers called Predators. Brody is the man who ends up inheriting the mantle of leader and is known as a hunter of men. Grace would play an accountant-type whose unassuming facade masks a dangerous serial killer. Braga is the tough female killer, Ali a man not afraid to die and Goggins is the loose canon of the group. Finally, Taktarov will appear as a former Russian special ops agent and Trejo as a hardened warrior with twin uzis strapped to his back.

Shooting begins next month and the movie is slated for a July 9, 2010, release.