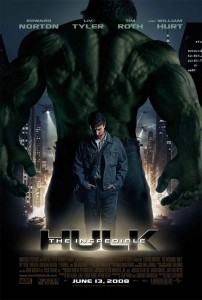 With the release of Iron Man, Marvel Comics began a renewed endeavor to create a film equivalent of their vast comic universe, establishing not only the titular mechanized hero but also the beginnings of The Avengers (who have their own movie due out in the future, along with Captain America and Thor). Of course, this isn’t the first time Marvel characters have been portrayed onscreen – Spider-Man and the X-Men have gotten three movies each already, along with The Punisher and other relative b-listers. In those series, however, there was no attempt to broaden the scope to include other segments of the Marvel universe – perhaps the tentative fourth installments will change that.

The Incredible Hulk seeks to fold the green giant into Marvel’s newfound film universe – and to do so it must erase all trace of Ang Lee’s 2003 Hulk movie, which starred Eric Bana and Jennifer Connelly as Bruce Banner and Betty Ross. In that rendition, which acted as an “origin story” as practically all inaugural superhero movies do, Banner/Hulk fought not only the military, but also his nefarious father, played by an insanely over-the-top Nick Nolte, acting as both Freudian supervillain and high-powered hobo. It didn’t always work, particularly in its awkward climactic “battle,” and many griped about the CGI work, but it’s still a richer, more interesting establishing film than, say, the first X-Men, and its editing style, which mimicked the panel-based layout of comics with frequent split-screen imagery, was frequently novel. Nevertheless, its heavy dramatic leanings and strange climax were enough to put off many comic fans, and a relaunch was set in place.

Leterrier’s film wisely skips the “origin” portion, showing the initial transformation only obliquely during the credits before skipping five months ahead to find Banner, this time played by a brooding Edward Norton, hiding away in a Brazilian slum before a freak occurrence catches the eye of the encroaching U.S. military, who seek (as ever) to use Banner’s DNA as the basis for a new line of genetically enhanced soldiers. As in the first film, Banner is pursued by devoted militarist General Ross (William Hurt), whose daughter Betty (Liv Tyler) is Banner’s old flame, as well as mercenary soldier Emil Blonsky (Tim Roth, seemingly delighted to be free of Haneke guilt-land), whose desire to overcome Banner’s monstrous alter-ego results in the film’s eventual climax.

Much about the movie is workmanlike – Norton’s low-key performance as a mostly resigned Banner is fairly dull, Tyler is given a much more perfunctory role than Connelly received as his love interest, and a surprising lack of improvement in the realm of CGI. Half a decade has passed since Lee’s Hulk, but the monster himself isn’t much improved – while his body is fairly detailed, there is less of an attempt to physically connect Norton with his converted form than in the previous film, which makes it harder to empathize with either figure. While Norton at least seems passionate about the material (despite his miscasting), Hurt seems to be here for the paycheck – disappointing given Sam Elliott’s pulpy portrayal of the same character. Of course, most comics fans will want simply to know whether the action sequences are improved. The answer is…yes and no. The film’s action highlight is a sequence set in daylight in which Blonsky and a host of military gadgets face off against the Hulk on a university campus, with hunks of metallic viscera flying about – and a delightfully brutal punchline. Unfortunately the CGI-driven brawl that concludes the film feels just as tossed off as the previous film’s metaphysical “power bubble” felt hokey. The film isn’t much better at reaching a lighter tone than Lee’s did, either, with much of the film taking place in darkness, and the rare attempts at humor generally less than convincing – there’s a particularly forced exchange between Norton and Tyler about anger management.

For Marvel, however, the movie does precisely what it’s supposed to – it sets up the viewer for a widening universe to come, and is careful to incorporate far more of the comic’s trademarks than Lee’s film did. While that’s meant to be a tantalizing prospect, The Incredible Hulk indicates that Marvel is keen on playing it safe when it comes to their newfound enterprises. In comics, any number of story tangents can be followed thanks to an endless number of spin-offs and reboots, but Marvel is hedging its bets here by seemingly creating a largely by-the-numbers megafranchise. After all, they need to keep the fans happy if they don’t want to keep re-establishing their heroes every five years, and that means not ruffling any more feathers. It’s telling that their biggest gamble so far – the unorthodox casting of Robert Downey, Jr. as Iron Man – has also been their ace in the hole. With its simplified themes and uncluttered action, this new Hulk will likely appease comic fans, but moviegoers may be left cold in the coming years if it’s representative of the studio’s overall direction.