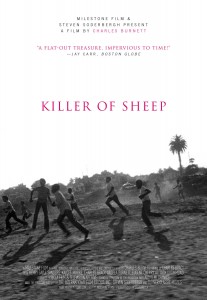 The Killer of Sheep

Killer of Sheep; don’t let the title put you off!

In cinematic history (that’s a really long time!) few films have portrayed ghetto life as accurately and humanely as ‘Killer in Sheep’. What aspects, you might ask, make it a real standout among others? Well, consider the fact that it was shot by a UCLA student on weekends with a shoestring budget, using a mostly amateur cast. Charles Burnett, the director of this poignant tale, unknowingly created a film that has acquired cult status since its creation thirty years ago. Although very few independent movies that suffered the same initial fate as Killer of Sheep (limited distribution) can be called “cult films” today (Punishment Park and Stroszek come to mind), critics unanimously lauded this simplistic production for its accurate depiction of the down-and-out lifestyle many people suffered in Watts, an African-American ghetto of Los Angeles.

I had never heard of this movie until our Arts Editor told me about it but the title and circumstances surrounding the film’s release immediately caught my interest. It opens with a powerful scene involving a father (Stan) and his oldest child. Stan berates his son for refusing to protect his younger brother when a group of children ganged up on the latter. His fiery gaze burns a hole through his son’s eyes while he chews him out, reminding him that family comes first and that under no circumstances shall one abandon the other. The ferociousness of his speech does not set the tone of the film however, as we discover later on that Stan is an insomniac whose brutal labor at the slaughterhouse directly contributes to his disassociation with reality. Through a series of loosely connected vignettes, his daily happenings and those of his friends and family are played out in or around his poor neighborhood.

One particular dinner scene establishing Stan’s disjointed reality has him staring right into his plate, daydreaming of who knows what, aloof and content. His wife and daughter look on although fully aware of his all-to-common behavior. Other interesting scenes involve the neighborhood children who play in the rubble of destroyed and abandoned buildings due to the lack of organized activities. At one point, Stan and a few friends plot to rob and kill someone for monetary purposes. Whether it’s the sight of a young boy wiping the dirt off his pants or a young girl singing to Motown tunes, the message is always present; desperation, frustration and unlimited hurdles fuel these people’s lives. Poetic yet heartbreaking, Killer of Sheep reveals itself as truly original in its goal to publicize the sometimes dangerous and highly volatile life in Watts. Fortunately for North American moviegoers, the movie has been restored and enlarged to 35mm by the UCLA Film & Television Archive and Milestone Films, thanks in part to a donation from filmmaker Steven Soderbergh.

In terms of music, the songs chosen by Burnett exemplify the wonderful talent pool that African American artists have created. “This Bitter Earth”, sung by Dinah Washington, is played during an especially tender moment between Stan and his wife. As they gently sway to the soulful melody, they hold each other tight; the wife grips her husband’s shirt tighter and tighter, perhaps in response to the lyrics that remind her of the south she grew up in. When the song ends, Stan leaves the room and her frustration boils over as she sits on a window sill, sobbing away while a voiceover confirms her nostalgic moment. In addition, I admired the Lynch-like use of dark, ambient music to set the tone for certain scenes, a definite reminder of Eraserhead, another movie you kids should see a.s.a.p. Killer of Sheep was not immediately released upon completion due to a snafu involving the musical rights; that is, until the restorers could pony up the 150,000$ required to secure the rights.

Although it has been brought up to modern standards, the movie succeeds in keeping its message fresh and delivers the same emotional punch to its audience as it did thirty years ago. Its impact on the way we think about poor, urbanized areas was not imminent, but rather delayed. In 1990 the Library of Congress declared the film a national treasure and placed it among the first 50 films entered in the National Film Registry. In 2002 the national society of Film Critics named it one of the 100 essential films of all time. Such praise for such a modest movie only goes to show that it deserves the distribution it is finally getting.

Listen to Episode 18 for a complete review … click here…