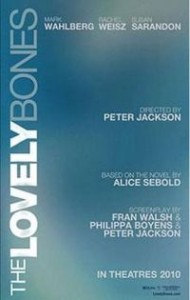 Dreamworks Pictures has released the first trailer for Peter Jackson ‘s big screen adaptation of The Lovely Bones . Many have complained that the trailer gives away too many spoilers. From my understanding the trailer focuses more on first chapter but adds some some major twists in the book and reveals the mystery of the whodunit. To be fair the mystery is revealed at the start of the book and is not the primary focus of the story.  The 2002 best selling novel by Alice Sebold is a story of a teenage girl who, after being brutally raped and murdered watches from heaven as her family and friends go on with their lives, while she herself comes to terms with her own death.