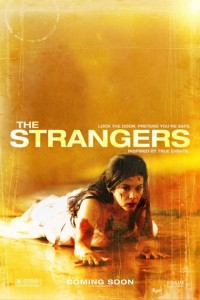 There’s a war of approach currently being waged in the field of mainstream American horror. On one hand you’ve got the “more is more” contingent, made up of “torture porn” progenitors Eli Roth (Hostel) and the Saw series, as well as Rob Zombie’s retro gorefests (House of 1000 Corpses, the cred-busting Halloween remake). On the other sits the small but significant movement towards no-frills horror more or less grounded in reality – last year’s Vacancy, while only fitfully effective, springs to mind, and so does The Strangers, a movie so doggedly minimal that one senses the screenplay could fit in your pocket.

The film opens with its most unusual set of decisions: a stern voice mentioning the frequency of violent crimes in America, and mentioning the story’s (dubious) ties to a specific real-life incident. The film’s opening scene skips to the end, showing us the viscera and destruction in and around the home where Kristen McKay (Liv Tyler) and James Hoyt (Scott Speedman) will spend the next 80 minutes getting terrorized by a masked trio of remorseless invaders. Following this peculiar opening (which serves to dampen the film with a sense of inevitability, cutting strongly against the post-Sixth Sense “twist ending” trend) we get the obligatory 20-minute opening to inform us of the strained relationship between our protagonists and to familiarize ourselves with their environment. Tyler and Speedman do a fairly good job of communicating the unspoken history they share, although given the circumstances surrounding the tension between them (Tyler quietly rejected his offer of marriage earlier in the evening), their interactions evoke too much comfort and not enough caution. The film misses a major opportunity here, in that it could have used this setup to explore the tension between them, but instead (as expected) their bonds simply heal themselves as a result of the ensuing terror.

To Bertino’s credit, however, some of his decisions (as director and screenwriter) are bracingly original; the film’s greatest innovation by far lies in its unorthodox treatment of the folk and country music that intermittently plays from the couple’s gramophone. The film’s most effective moment comes with a tense confrontation involving a gun, an axe, a piano, and Joanna Newsom’s “The Sprout and the Bean.” The scene mines the sonic tension in Newsom’s double-tracked vocals (“should we go outside?”) and spare harp plucking. Another scene memorably milks the Appalachian harmonies and odd intervals that characterize Gillian Welch’s Time: The Revelator by looping two seconds (“quicksilver girl”) from “My First Lover” for what feels, briefly, like an eternity. The soundtrack represents another categorical rejection of the heavy-metal excess that has pervaded recent horror (see: the soundtracks for the Saw movies). The film also contains the longest stretches of silence and inaction seen in a major American horror film in a long time, making good use of ambient noise and shadows (never more effective than the moment in which the bag-headed intruder slowly emerges behind Tyler in the kitchen, as unfortunately revealed in some of the film’s posters).

Bertino shows his weaknesses as a filmmaker when he distrusts elements he has already established; the decision to separate the lovers for much of the film’s last half-hour both robs the film of its only real character interactions and feels maddeningly improbable. He also doesn’t shy away from two major horror movie tropes: a character intoning that they’ll “be right back” as a harbinger of doom, and a highly questionable final shot that rings hollow with familiarity and cheapens the film’s opening gambit. Until that moment, The Strangers feels like something very strange indeed: a horror movie with an argument. That phrase of course brings to mind Michael Haneke’s Funny Games, a considerably more brutal film that essentially acted as a movie-length guilt trip on the nature of entertainment. The Strangers, on the other hand, is unconcerned with the nature of film, instead serving to emphasize the ordinary nature of the crimes on display – underlined by the decision to stage the ritualistic carnage that takes place near the film’s end in the full brightness of morning, punctuated with barren shots of the surrounding countryside. Bertino’s debut turns out to be a deeply flawed one that only communicates that one idea effectively, but that puts it ahead of some of his contemporaries, most of whom (Haneke included, given his masturbatory shot-for-shot “U.S.” remake of Funny Games) feel the need to stretch out their one idea over the course of several films. It remains to be seen if Bertino’s small, but welcome eccentricities will prevail in future endeavors or if he’ll fall prey to the self-cannibalization that has characterized the genre’s other recent would-be auteurs.