Home
Entertainment
This Week in Comics: 22/01/2014
Prev Article Next Article 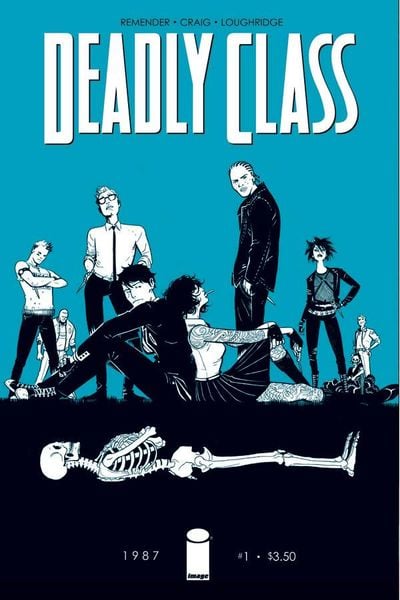 What do you get when you take Rick Remender, John Hughes, the X-Men and throw them in a big ass blender? You get Deadly Class. Murder is an art. Killing is a craft. At King’s Dominion High School for the Deadly Arts, the dagger in your back isn’t always metaphorical, nor is your fellow classmates’ poison. This book is going to rule, much like how Remender is going to rule 2014. Callin’ it here first folks!

When actors cross over into the comics medium, they are often (unfairly) judged harshly long before any of their work has been seen. Such is the vicious nature of comic fandom. However, those smart enough to look past the name “Alyssa Milano” and delve into what she stands for will find she has more than enough clout to tackle the tale she is setting out to tell. But it wouldn’t mean anything if the story didn’t sound solid and, low and behold, it’s a solid story. Ed Hiccox and Nate Graft are young, brilliant, and the cofounders of YourLife, a social networking company that has changed the way the world stays connected. In secret, these best friends are also ‘sve_Urs3lf,’ the largest, whitehat hacking group on the planet, exposing information and sparking revolutions across the globe.

Dark Horse’s monthly anthology is always packed full of tasty treats but this week it’s topped with a bright red cherry. That cherry being an all new Hellboy by Mr. Mike Mignola. This book also features a large number of up-and-comers so if you’ve never had the pleasure of grabbing this anthology, well, there’s no time like the present. I guess that’s why its called a gift.

Though you probably missed this title during its initial run, now is your chance to make sure you right your error. Collecting all five issues of the run, as well as a slew of extras, this high spirited tale of adventure is a great read for fans of Avatar: The Last Airbender, or just anything else that is awesome. It’s fun and gorgeous, what more could you want?

Dredd gets a rude awakening when he’s shipped to the west coast as part of a ‘Judge-exchange’ program. A great fish out of water tale made even greater by Ulises Farinas magnificent artwork. I’m a big fan of what IDW is doing with the Judge Dredd property and it’s about time North America is finally doing the big guy some justice.

I finally managed to read Battle of the Atom because of general curiosity and was so glad I decided not to purchase that series. Let’s just say, Bendis’ strength is not time-travel stories. His strength however does lie in dialogue and heart. So, when alien races learn that Jean Grey, host of the destructive Phoenix Force, is back on earth, they do something about it. Now it’s up to the rest of the All-New X-Men and the Guardians of the Galaxy to save Jean Grey from twisted intergalactic justice! Hopefully Bendis can wash out the terrible cross-over taste he keeps leaving in my mouth, because the Trial of Jean Grey sounds awesome.