MTV has cancelled the thriller Eye Candy after one season. Series star Victoria Justice made the announcement via twitter.

Hi everyone! I wanted you guys to hear it from me first, that the cast and I received news that Eye Candy will not be returning for season 2.  Even though a lot of you are going to feel sad/angry, please know that playing Lindy Sampson, is something that I loved and I will hold dear to my heart. I couldn’t have asked for better cast mates to work with either.  They are the most down to earth, talented and kind souls that I am so happy to have met. Then there’s our show runner @Christiantwit1 who is so awesomely talented and made a show that I am so incredibly proud to be a part of.  A very special thank you to Jason Blum and the Blumhouse team, you guys are amazing! Jessica, thanks for all your hard work and dedication to Eye Candy.

Last but definitely not at all least, thank you to the amazing fans. I saw all of your WW trends (it might be 23 or 24 to date) and your unflinching support. It’s because of all of you that I get to do what I love. I am beyond grateful for that. It made me so happy that you embraced the show the way you did.  I was so lucky to have you guys along for the ride, because you made it that much more exciting!

As for @Caseydiedrick, @HarveyGuillen, @Kierseyclemons, @fryryCooper  & @JohnGaret, I love you all and I’m so excited to see what great things you guys will be doing next. Let’s all grab dinner next week and celebrate a show that we all loved and were so proud to make.

Love to you all,

Netflix has renewed the superhero drama Daredevil for a second season. However, the renewal comes with a caveat, as current showrunner Steven S. DeKnight will be stepping down from the series. Writers Doug Petrie and Marco Ramirez, both of whom worked on the show’s first season, will be taking DeKnight’s place as showrunners in the second season. The duo mark the series’ third showrunner, after creator Drew Goddard departed the show during the early stages.

Following two standup specials, Aziz Ansari’s new series will also be a Netflix original. The series, which has yet to get a title, is co-created by Ansari and Alan Yang, both of whom previously worked together on Parks and Recreation. Pre-production on the show is well underway, as Parks and Recreation and Brooklyn Nine-Nine co-creator Mike Schur is onboard as executive producer. The show has also tapped The Spectacular Now‘s James Ponsoldt to direct,  and assembled a cast that includes Ansari himself alongside Jon Benjamin, Eric Wareheim, Noel Wells, Lena Waithe, and Kelvin Yu. A premiere date for the series has yet to be announced.

Spike TV has released the first trailer for its upcoming series Tut. The three episode miniseries stars Sir Ben Kingsley, Nonso Anozie, and Alexander Siddig. The trailer can be seen below.

Tut will make its premiere on July 19th.

Katie Holmes is working with The Vampire Diaries and Sons of Anarchy writer Mike Daniels for a new show. The series, which has been picked up by Cinemax but remains untitled, will see Daniels as showrunner and Holmes as executive producer, following characters that are co-creations of the duo. The show will revolve around a victims’ right advocate who goes looking for justice following an attack by a stalker. A cast or premiere date for the series has yet to be announced.

Nebraska scribe Bob Nelson’s next project may potentially be on the small screen. Amazon has ordered a pilot for Highston, a 30-minute series, that is written by Nelson and directed by the duo of Jonathan Dayton and Valerie Faris, who have previously worked together on Little Miss Sunshine and Ruby Sparks. Deadline provided this show synopsis.

The single-camera project, which is casting, centers on Highston Liggetts, a kind 19-year-old and perched on the edge of adulthood. When he encounters a world he doesn’t understand, like Elwood P. Dowd, he retreats into his vast imagination, where famous “friends” are his companions and mentors.

The pilot is expected to follow the same selection process as Amazon’s other series, where they are put online for Amazon Prime members to vote on.

JK Simmons is the latest performer set to make the transition from movies to television, as he has signed on to the lead role, as well as executive producer, in the new Starz series Counterpoint. Created by Street Fighter: The Legend of Chun Li scribe Justin Marks, the show previously tapped The Imitation Game‘s Morten Tyldum to direct the first two episodes and executive produce as well. Deadline describes the series thusly.

Described as an espionage thriller with a metaphysical twist,Counterpart tells the story of Howard Silk (Simmons), a lowly cog in a bureaucratic UN agency who is turning the last corner of a life filled with regret, when he discovers the agency he works for is guarding a secret: a crossing to a parallel dimension. Through Howard and his “Counterpart” on the other side, Prime, the show will navigate themes of identity, idealism, what ifs, and lost love.

A full number of episodes in the initial pickup, or a premiere date, have yet to be announced.

True Detective has released a new poster for its upcoming second season, which can be seen below.

David Robert Mitchell’s next project will be on tv. The It Follows director is developing a crime drama titled Mr. Postman, which he will executive produce and direct. The Hollywood Reporter described the series thusly.

Mr. Postman follows a mailman who investigates the dark mysteries within his all-American town after a horrific event occurs on his own street.

The series has yet to be picked up by a channel.

Saturday Night Live has announced the final series of hosts for its current season. The sketch comedy show’s next three episodes, the last in its 40th season, will be hosted by Scarlett Johansson, Reese Witherspoon, and Louis CK, with the latter hosting the season finale. The full announcement can be read below.

SNL kicks off the final three shows of the season with Scarlett Johansson making her fourth hosting appearance on May 2.  Johansson reprises her role as Black Widow in the highly anticipated “Avengers: Age of Ultron,” opening May 1.

Wiz Khalifa will make his SNL debut. “See You Again,” Khalifa’s hit song from the “Furious 7” soundtrack featuring Charlie Puth, currently sits at No. 1 on the Billboard Hot 100. This summer, he will be co-headlining the Boys of Zummer tour with Fall Out Boy.

On May 9, Reese Witherspoon will return to Studio 8H for her second time as host. The Academy Award winner next teams up with Sofia Vergara for the upcoming comedy, “Hot Pursuit, in theaters May 8.

Florence + the Machine takes the stage for the third time as SNL musical guest. The band’s newest album, “How Big How Blue How Beautiful,” will be released in the U.S. on June 2 and features the new singles “What Kind of Man” and “Ship to Wreck.”

Emmy Award winner Louis C.K. will host the SNL season finale on May 16.  Louis C.K. returns for his third appearance as host, having received Emmy nominations for his two previous hosting engagements. The fifth season of the critically acclaimed series, “Louie,” is currently airing on FX. His special “Louis C.K. Live at the Comedy Store” is available on Louisck.net and will air on FX May 28.

Rihanna will perform as musical guest for the fifth time. The Grammy Award winning singer starred in this year’s box office animated hit, “Home.” Her newest single, “B**** Better Have My Money,” is currently available for downloa

The 2015 Star Wars Celebration in Anaheim saw a release of a trailer for the second season of Star Wars Rebels. The trailer can be seen below.

PBS has optioned Elizabeth Gilbert’s 2013 novel The Signature of All Things as its next television show. The adaptation will mark Gilbert’s first foray into small screen programming, and follows the adaptation of her memoir Eat, Pray, Love: One Woman’s Search for Everything Across Italy, India and Indonesia into a feature film in 2010. Emily Ballou, who has previously written for ABC’s The Slap and AMC’s upcoming Humans, has been tapped to pen the adaptation. The book’s synopsis, from publisher Bloomsbury, is as follows.

At the beginning of a new century, Alma Whittaker is born into a perfect Philadelphia winter. Her father, Henry Whittaker, is a bold and charismatic botanical explorer whose vast fortune belies his lowly beginnings as a vagrant in Sir Joseph Banks’s Kew Gardens and as a deck hand on Captain Cook’s HMS Resolution. Alma’s mother, a strict woman from an esteemed Dutch family, has a knowledge of botany equal to any man’s.

It is not long before Alma, an independent girl with a thirst for knowledge, comes into her own within the world of plants and science. But as her careful studies of moss take her deeper into the mysteries of evolution, the man she comes to love draws her in the opposite direction.

The Signature of All Things is a big novel, about a big century. It soars across the globe from London, to Peru, to Philadelphia, to Tahiti, to Amsterdam. Peopled with extraordinary characters – missionaries, abolitionists, adventurers, astronomers, sea captains, geniuses and the quite mad –above all it has an unforgettable heroine in Alma Whittaker, a woman of the Enlightened Age who stands defiantly on the cusp of the modern.

Syfy has unveiled their summer lineup this week. The channel will kick things off with a two-hour premiere of the third season of Defiance on June 12th at 8 pm ET, followed by the series premiere of Dark Matter on the same night at 10 pm ET. The following week will see the series premiere of another one of the channel’s original series, titled Killjoys, which will make its debut on June 19th at 9 pm ET. The second season of Dominion will premiere on July 9th at 10 pm ET, and Sharknado 3: Oh Hell No! will premiere on July 22nd at 9 pm ET.

MTV has announced its summer lineup as well. The first series to mark the season’s beginning on the channel will be the Scream television series, which will make its series premiere on June 30th at 10 pm ET. Teen Wolf will make its fifth season premiere on June 29th at 10 pm ET, while Awkward. will begin its final season on August 31st at 9 pm ET, followed by the premiere of the second half of the second season of Faking It on the same night at 9:30 pm ET.

MTV also announced their renewals and pickups. Faking It received a third season renewal, while the channel is also developing The Shannara Chronicles. The latter series’ crew includes Smallville’s Al Gough and Miles Millar, who are onboard in both a writing and executive producing capacity, and is adapted from Terry Brooks’ Shannara fantasy book series.

Very happy to announce that Walter Skinner will once again be getting all grumpy and bitchy with his two wayward kids. Very happy. 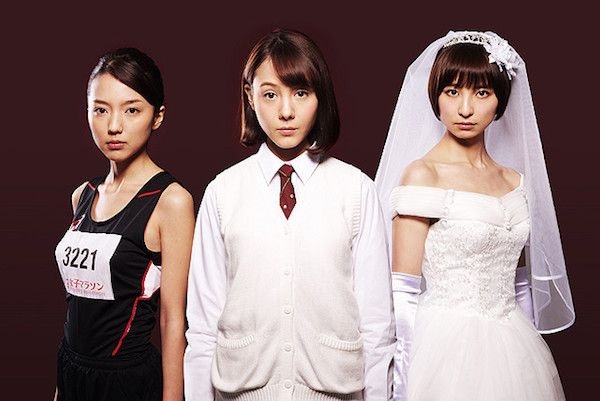