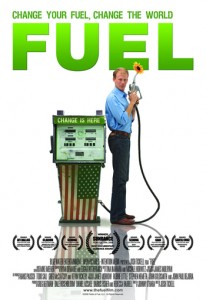 “Fuel is successful despite Ticknell’s self-aggrandizement. The subject is too important to ignore, and, with the Gulf of Mexico becoming the USA’s new national embarrassment, there is no time like the present to reconsider our society’s addiction to fossil fuels”

Energy is one of the defining issues of our time – dependence on fossil fuels, inefficient consumption, and environmental degradation have become major obstacles for our society. Enter Fuel, a well-timed and aptly named documentary that confronts the current problems with our model of energy consumption and has some strong suggestions for the future. Winner of the Audience Award at Sundance in 2008, Fuel has been recut with forty-five minutes of new footage.

Fuel feels like two separate narratives strung together, and it’s important to consider each independently of the other. On one hand, Fuel is a documentary about how dependence on fossil fuels is ruining the American economy and environment. On the other, it is about filmmaker Josh Tickell and his activism. The former thread is quite interesting. The latter, unfortunately, is not. When Fuel sticks to the former subject, it is a very powerful documentary. It is primarily concerned with biodiesel; for those of you who recall the articles in Science discrediting corn-based ethanol, rest assured that the subject is dealt with quite thoroughly. It features some interesting new technologies, such as biodegradable plastics and algae-based biodiesel. The documentary also looks at the history of fuel, for example, detailing Henry Ford’s ethanol-fueled car and its demise when Standard Oil supported prohibition, and President Regan’s subsidies for SUVs.  More importantly, Fuel brings to the screen oil industry experts, professors, economists, entrepreneurs, lawmakers, and a cavalcade of other thinkers who bring facts and arguments to the table.

When Fuel leaves the scientific and historical realm and focuses on Tickell, it becomes lacklustre and tiresome. Much of the first portion of the film focuses on Tickell, who is sometimes a narrator and sometimes (well, often) speaks directly to the camera. At times, it becomes confusing as to whether Tickell is passionate about biodiesel, or about himself. In his words, “I’d done this two-year trip to promote biodiesel. I’d done hundreds and hundreds of interviews – radio, TV, newspaper, magazines. I wrote two books, lectured all around the US, and lectured all around the world, but nothing significant happened with biodiesel. If anything, we slid backwards. It was almost like I hadn’t done anything.” We are also treated to gratuitous shots of Ticknell walking across beaches, leaning on chain-link fences, and holding protest signs nonsensical contexts.

Fuel is successful despite Ticknell’s self-aggrandizement. The subject is too important to ignore, and, with the Gulf of Mexico becoming the USA’s new national embarrassment, there is no time like the present to reconsider our society’s addiction to fossil fuels.