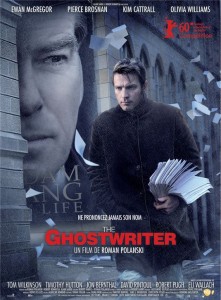 Political suspense thrillers have given way to contrived plotlines and endless bullets flying propelled by buff but talent-challenged Hollywood names. The magic of movie making is rarely experienced and often times in places that the masses will never see. Taking a traditional story and making it come to life is no easy task and no one has managed to be up for the job until now.

The Ghost Writer, starring Ewan McGregor and directed by Roman Polanski is a triumph in film making, though nothing less would be expected from such a season and talented artist. There aren’t any big bangs, silly catch phrases or “larger than life” action heroes playing the same old tired role. The Ghost Writer brings together a collection of talented and original actors whom dominate their craft and bring truth to their characters. Not since Young Adam has Ewan McGregor been better suited for a role. His precise comic timing and physical curiosity create a voyeuristic atmosphere for the viewer and allows for deft emotional shifts.

The small but pivotal roles played by Jim Belushi and Timothy Hutton give the viewer comfort and familiarity along with talent and intent, that isn’t obvious at first glance. Pierce Brosnan (Roman Polanski’s first and only choice for the role of Adam Lang) was so unassuming and genteel that it would be easy to understand why he would easily win over the position of prime minister. The only true aggravation is dealing with Kim Cattrall attempting to remember she is supposed to be using a British accent. She seems to forget her character a few times, but as we know, Polanski has a habit of casting attractive yet amateurish women. This offense is negligible and easily ignored.

It is nearly impossible to describe the brilliance of Tom Wilkinson’s character without spoiling the film, so this quote is all that is needed: ““That whole summer is a blur; A very happy blur.” Casting, score, direction, photography it all works together with symmetry and patience for the mature moviegoers. The atmosphere created is unmatched by any other film this year. No one makes movies like this anymore, maybe because they haven’t the bravery or maybe they just lack the talent to bring an idea from a page to the screen in this humble and important fashion. The Ghost Writer reminds moviegoers that true movie making is an ability and a gift that when shared can bring to life not only characters and situations, but also emotions and expectations for these fictional embodiments.

The Roman Polanski interview located in the special features outlines his classical and intelligent approach –  taking a basic idea and turning it into a masterpiece of film. The agenda-free The Ghost Writer is simply a movie, made for an audience that loves a well told story. Perhaps Polanski said it best: “I’m making movies for the grown-ups.”