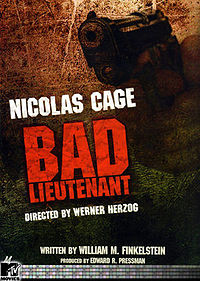 Oscar-winner Nicolas Cage is to star in a remake of 1992 film “Bad Lieutenant,” the grim drama which stoked controversy for its explicit depictions of sex and drug use. Entertainment industry journal Daily Variety reported that the film, which featured Harvey Keitel as the lead in the original, would be directed by acclaimed German film-maker Werner Herzog.

Drawing elements from the original film, Bad Lieutenant: Port of Call New Orleans features a crooked cop (Nicolas Cage) who is a drug addict and takes sexual favors for bribes.

The script for the remake was penned by TV writer William Finkelstein. One major change from the original film was moving the setting from New York City to New Orleans. Herzog insists that the film is not a remake, saying, “It only has a corrupt policeman as the central character and that’s about it.” Herzog went on to say that he has never seen Ferrara’s film.