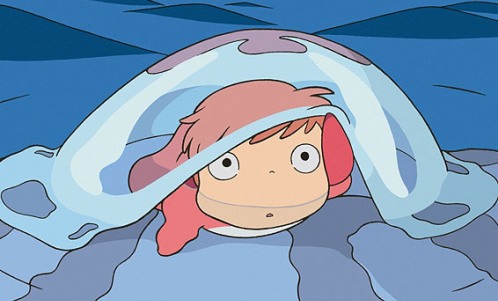 Hayao Miyazaki’s latest outing, Ponyo, uses a watercolor and pastel like animation style that decidedly has an old school feel to it. But that doesn’t mean it isn’t stunningly beautiful. The absence of CGI is so refreshing nowadays. The reviews haven’t been as triumphant as his previous outings but that hasn’t stopped the film’s impressive box office (so far grossing over $180 million worldwide). The story is inspired by Hans Christian Anderson’s fairy tale The Little Mermaid, but this time it involves a goldfish. The outstanding roster of vocal talents for the English dubbing include: Noah Cyrus, Cate Blanchett, Matt Damon, Tina Fey, Cloris Leachman, Liam Neeson, Lily Tomlin, Betty White and Frankie Jonas. Ponyo is set to hit theaters on August 14th from Walt Disney Pictures.