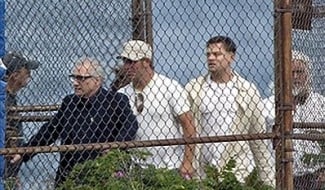 From Oscar-winning director Martin Scorese, “Shutter Island” is the story of two U.S. marshals, Teddy Daniels (Leonardo DiCaprio) and Chuck Aule (Mark Ruffalo), who are summoned to a remote and barren island off the cost of Massachusetts to investigate the mysterious disappearance of a murderess from the island’s fortress-like hospital for the criminally insane. The film is based on the 2003 novel Shutter Island by Dennis Lehane. Production started in March 2008; Shutter Island is slated to be released on October 2, 2009.