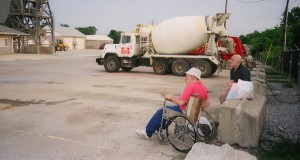 Anyone who enjoyed Korine’s previous feature, the funny, surreal Mister Lonely, may have been looking forward to what he was to do next in anticipation of a further expansion into pseudo-accessible territory. Instead, Korine decided to jump off the arthouse deep end with Trash Humpers, a reasonably well-executed conceptual short that somehow found its way to an incredibly tortuous 78 minutes. An “artifact” rather than a film, Humpers is meant to act as a simulation of found art, an odd relic from an unknown universe bestowed to us through some incredibly unfortuitous happenstance. Perhaps if Korine had issued the film (shot on deliberately primitive video) anonymously in a soiled plastic bag, the film might have accomplished just such an effect after being rediscovered by the bored film students of future decades, but as it stands it’s merely an intermittently funny but mostly agonizing collection of vignettes ranging from the stupid (the many, many shots of its masked[?] protags humping things) to the irritating (thought patterns that appear to mimic spam) to the disturbing (a bloody murder) that should never be viewed outside of film festival walls. Though there’s still no mistaking a Todd Solondz film, there’s something slightly new afoot in his latest feature. the portentously titled Life During Wartime. Yes, there’s still his trademark sexual depravity, and the use of casting as another realm of formal experimentation (Palindromes), but Life feels tonally somewhat separate from its predecessors, particularly the caustic Happiness, with which it shares a cast of characters, but not a cast. Every principal from Solondz’s celebrated second film gets a reprise here, only recast – so we get The Wire‘s Michael K. Williams in the Philip Seymour Hoffman role, Ally Sheedy in Lara Flynn Boyle’s, etc. The MVP of this new round of players is Allison Janney as Trish, a character more flippantly portrayed in Happiness. Most filmmakers find it all too easy to cast Janney in trashy or judgmental roles (see Sam Mendes’ Away We Go), but Solondz cannily exploits her empathic quality instead of taking the straight (cynical) route. Other standouts include Williams, Paul Reubens in the Jon Lovitz role (as an apparition), and Ciaran Hinds, whose imposing figure is nevertheless not as obviously menacing as Dylan Baker’s neverending sneer. Every character gets another go-round, begging our forgiveness as they endure a new round of indignities, though none are nearly as degrading as those witness in Happiness. Some scenes even dare to hint at redemption. There are numerous devices that don’t really gel, like the aforementioned use of “ghosts,” as well as a labored insertion of dialogue mentioning terrorism and war, but it’s nice to see Solondz warming up somewhat to his own creations. The Road
Directed by John Hillcoat

A frustrating mix of the sublime and the clumsy, The Road feels very much like the product of its protracted production history. The Cormac McCarthy adaptation was famously delayed for over a year, indicating a studio uneasy with its product – unsurprising, given the source material’s unremitting bleakness. It’s not as though they should have expected any different – Hillcoat’s previous film, The Proposition, was a masterfully nihilistic western set in turn-of-the-last-century Australia. The unfortunate truth is that The Proposition more consistently and effectively conjured a sense of doom and fallen humanity than this vision of a nearly-worthless future Earth, the product of a series of environmental catastrophes. This is especially unfortunate since the film features a very strong lead performance from the reliable Viggo Mortenson, here offering a father determined to protect his last remaining ally, his young son (Kodi Smit-McPhee). Any story that posits a universe as bleak as this one needs a permanent spell to be cast over the viewer in order to be truly effective, but there are several lapses in execution that puncture it – most importantly, the sense of menace and danger that should be lurking around every corner isn’t felt nearly enough – not helped along by a series of questionable choices, from Nick Cave and Warren Ellis’ surprisingly schmaltzy score, to the casting of too-recognizable faces in even the smallest of roles, to smaller details, like the implication that Coke survives the apocalypse undaunted (both in the form of a still-fizzy Coke can and a still-flourescently colored cottle of Coke-owned Vitamin Water). Yet, there are moments of poetry as well, from the painful wintry exit of Mortenson’s long-suffering wife (Charlize Theron), to the central emotional scenes of the film’s last reels. Let’s hope the inconsistencies are the product of studio futzing and not the failure of Hillcoat’s own vision. I Am Not Your Friend
Directed by György Pálfi

Pálfi’s previous film, Taxidermia (unseen by me), has received great notices from trusted sources, but it would have to be radically different from his latest, the dismal improvisational mess I Am Not Your Friend, to be of any merit. It actually opens promisingly, with a funny, poignant ten-minute documentary sequence taking place in a daycare, with various toddlers attempting to define their ideas and boundaries of friendship. Unfortunately, it’s by far the more insightful of this distended double feature, with the main event being a tired exploration of the intermingling lives of a set of urban lowlifes, with the obvious point being to notice that they are acting no differently from the rambling children of the previous segment – that’s all well and good, but you wouldn’t need more than another ten minutes to have the point made. Pálfi doesn’t allow his characters a mite of common sense, decency or even basic social morés, which would be fine if the film were in the slightest bit funny, bracing or formally exciting, but instead it’s a rote shakycam exercise that makes the mumblecore crew look like geniuses.