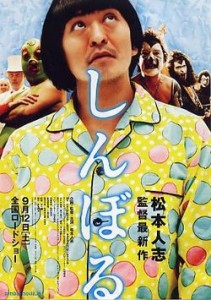 While watching Symbol, for a fleeting moment I wondered if someone had slipped something in my drink or sprinkled an illicit substance on my popcorn.  What else would explain the onslaught of bizarre comedic sequences that penetrated my senses?  But my euphoric trip wasn’t induced by any hallucinogen.  No, that honor goes to the crazed yet brilliant mind of writer-director Hitoshi Matsumoto.

Symbol opens in the middle of the Mexican desert with a mysterious luchador (a masked wrestler) sitting motionless at a kitchen table.  Before he even utters a word, we are quickly thrust into a large white room where a Japanese man (played by Matsumoto, who dons a Moe Howard-Three Stooges wig) in pyjamas wakes up to discover he’s being held captive.  Both stories are seemingly unrelated and run concurrently in the film. Matsumoto’s opus takes a turn for the strange when the Japanese man notices an odd phallic object protruding from the bright white wall.  Upon careful examination, he reluctantly pushes the tip, which unleashes a horde of nude cherub-like babies reaching out from the walls and then settling back into the foundation, leaving only their tiny penises exposed.  With little else to do, the prisoner decides to push one of the many protrusions surrounding him.  To his amazement, a pink toothbrush is suddenly jettisoned from the wall and falls to the floor.  Confused, the man continues to push each protrusion to reveal a rope, chop sticks, sushi, a vase, a plunger, an African sprinter and numerous other objects — all of which, the incarcerated gentleman ultimately uses in an attempt to escape his jail.  As these peculiar events unfold for the pyjama-clad prisoner, so do the events that bring the masked wrestler closer to the fight of his career. It’s Matsumoto’s performance as the hapless captive that successfully steers the film, which could have been a dull experiment had his comedic timing been off.  Matsumoto’s direction is also solid as both narratives are seamlessly told independently from one another only to converge wonderfully at the end.

It’s hard to pigeonhole Symbol in any particular genre, but I would best describe it as a live-action Looney Tunes cartoon on crack.  Don’t bother to look for any poignant message on the war in the Middle-East or the frailty of the human condition.  Matsumoto’s sophomoric film is just a quick fix to help us forget these harsh realities.  Now isn’t that a high we could all use?