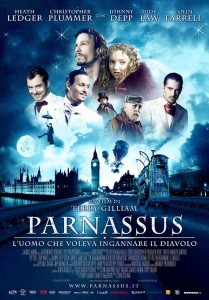 Those without tolerance for Gilliam’s flights of fancy won’t find themselves as new converts, though it is of a somewhat darker hew than some of his past work…

The Imaginarium of Doctor Parnassus
Directed by Terry Gilliam

For most filmmakers, the death of a principal performer in the midst of a production is a crippling disaster. For Terry Gilliam, it almost seems par for the course. Over the span of his entire career, his films have either been threatened, damaged or cut down outright by studio meddling (Brazil), intense self-doubt on Gilliam’s part (12 Monkeys) or some freakish combination of all things that could possibly go wrong (his failed, and recently re-ignited, The Man Who Killed Don Quixote, chronicled in the documentary Lost In La Mancha). So it’s perhaps fitting that his most energized effort in some time seemed to be thrown into turmoil by the sudden death of Heath Ledger, to whom The Imaginarium of Doctor Parnassus is dedicated. Gilliam seems to work optimally whilst under duress of one kind or another, and while Parnassus is hardly his best film, it still feels like a shot in the arm following a string of disappointments.

For perhaps the first time in a Gilliam film, there is no clear protagonist beyond the titular figure himself (regally played by Christopher Plummer), a shaman who long ago “won” eternal life from the Devil (Tom Waits). He travels through modern London, peddling his mystical delights (immersing the willing into a realm sculpted by their imaginations) with his assistants in tow, each of whom steal the spotlight for varying amounts of time – young Anton (Andrew Garfield), feisty dwarf Percy (Verne Troyer) and his daughter Valentina (game newcomer Lily Cole). Potential salvation arrives in the form of Tony (played, in alternate “transformations,” by Ledger, Johnny Depp, Colin Farrell and Jude Law), a mysterious shape-shifter with a shady past whose intentions are unclear. 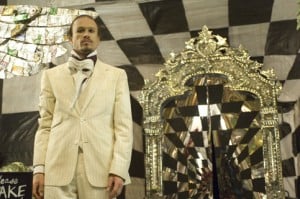 Tony’s intentions aren’t the only aspect of Parnassus‘ plot left for the viewer to determine, which actually serves to bolster the film’s sense of purpose. As the film traverses between the real world, filmed principally in the dingy locales that have populated much of Gilliam’s work, and the digitally rendered realms of imagination, Gilliam (working with screenwriter Charles McKeown, with whom he collaborated on Brazil and the film that most strongly recalls this one, The Adventures of Baron Munchausen) largely eschews obvious exposition, save for a detailed history of Parnassus’ dealings with the Devil. Much is, appropriately enough, left to the imagination, and the result is refreshingly unburdened. 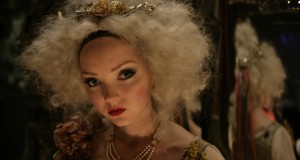 Parnassus is Gilliam’s most ambitious film in some time, and that carries news both good and bad. The digital photography suits the film’s gritty London sequences, resulting in a clash of the real and fantastic recalling Neil Gaiman’s best work, but some of the digital effects sequences are ill-conceived, particularly a climatic sequence involving a floating, shattered mirror. The sequences all carry a fairly cartoonish feel, which will irk many in an age of “photo-real” effects, but the style generally suits the film’s themes of unreality. Gilliam’s greatest coup, however, may be the ways in which we are reminded of Ledger’s passing – not only by the appearances of Ledger’s famous friends, but also in the film’s recurring theme of embracing mortality, which crops up in particularly poignant fashion in a scene that features Depp’s Tony urging a frightened woman to accept death itself as a form of permanence. (According to Gilliam, the scene existed before Ledger’s passing and was filmed as written.)

Those without tolerance for Gilliam’s flights of fancy won’t find themselves as new converts, though it is of a somewhat darker hew than some of his past work. Rather, Parnassus, clichéd as this will doubtlessly sound, reaffirms Gilliam’s creative energy in the face of unfortunate tragedy. As he prepares to mount La Mancha for the fourth time, moviegoers of all stripes can at least appreciate the tenacity with which the 68-year-old filmmaker continues to pursue his peculiar visions.