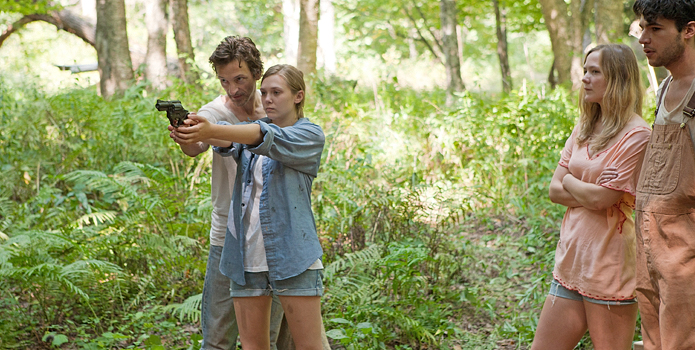 I’ll just admit right now, that watching twenty five films in ten days is quite a chore, but there is just too many movies that I really want to see. Honestly if I had the time I would make this a list of fifty ilms instead. Here is my next batch of five films that I feel will be worth my time. Guy Maddin doesn’t harbour any particular resentment towards the Toronto International Film Festival for rejecting his first feature film Tales From the Gimli Hospital way back in 1988. Over the course of a career that has spanned nearly two decades and 25 films, Maddin has cemented his repututation as one of Canada’s most important, daring, unique filmmakers. His latest Keyhole is described as a surreal indoor odyssey of one man, Ulysses Pick (Jason Patric) struggling to reach his wife (Isabella Rosellini) in her bedroom upstairs, this hypnotic dreamlike journey bewilders and captivates. After a five-year hiatus, legendary filmmaker William Friedkin (The French Connection, The Exorcist) returns with Killer Joe, a black comedy inspired by yet another Tracy Letts play (the first being Friedkin’s last film, Bug).

Synopsis: Emile Hirsch plays a desperate Texas debtor who plots to kill his mother, with help of his family (Thomas Haden Church, Gina Gershon). They hire a crooked cop (Matthew McConaughey) to do the job, but Killer Joe asks for their teenage daughter (Juno Temple) as a “retainer.” While I haven’t been the biggest fan of the last two Todd Solondz films, I really can’t help but taking interest on all his projects. Dark Horse, the latest Solondz comedy is set to play the Toronto International Film Festival, and the fest has dropped the first footage of the film which you can see below. Dark Horse stars Christopher Walken, Mia Farrow, Selma Blair, Zachary Booth and Donna Murphy, with the lead role played by Jordan Gelber of Boardwalk Empire and Law & Order. Melancholia tells a story that re-tells the final days of an apocalypse on Earth as the planet Melancholia (which has been hiding behind the Sun), draws close. The film premiered at Cannes this past May, and despite controversy surrounding its director, the film received extremely positive reviews.

Here is what Lars Von Trier had to say about Melancholia as quoted in Politiken:

“In Melancholia I start with the end. Because what is interesting is not what happens but how it happens! So we begin by seeing the world being crushed, then we can tell the story afterwards… In this way you don’t have to sit and form theories about what will happen, but can delve down into some other levels and become interested in the pictures and the universe – that’s what I imagine”.

One of the most critically acclaimed and talked about films at this year’s Sundance Film Festival, Martha Marcy May Marlene will screen at this year’s Toronto International Film Festival. The film marks the directorial debut of Sean Durkin and stars Elizabeth Olsen and John Hawkes. Here is the official plot summary: Watch the trailer below.

Martha Marcy May Marlene stars Elizabeth Olsen as Martha, a damaged woman haunted by painful memories and increasing paranoia, who struggles to re-assimilate with her family after fleeing a cult.