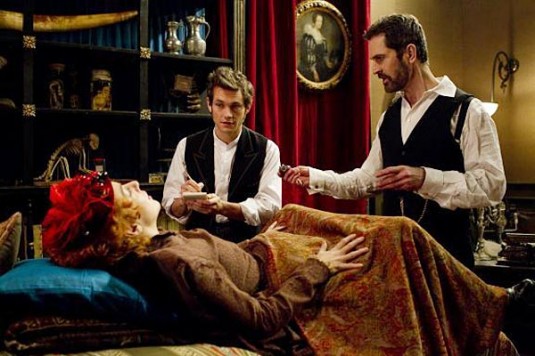 Considering that this is a romantic comedy about the invention of the vibrator, there are a few things you should know. During the nineteenth century, “female hysteria” was a common catchall diagnosis for women suffering from a wide variety of ailments including mental health issues, irritability, and even lust. Treatment typically consisted of a doctor performing a “pelvic massage” on the woman in question, where “pelvic massage” was simply a euphemism for genital stimulation. The treatment was considered successful when the patient experienced a “hysterical paroxysm,” which we would now call an orgasm. This is the world Hysteria operates in.

Hysteria is, at heart, a romantic comedy. It follows noble but befuddled young doctor Mortimer Grenville (Hugh Dancy), assistant to London’s foremost specialist on women’s medicine, Dr. Robert Dalrymple (Jonathan Pryce). Grenville finds himself trapped in a love triangle with his employer’s two daughters, the sweet and servile Emily (Felicity Jones), and outspoken wild child Charlotte (Maggie Gyllenhaal). When does the vibrator come into play? When Grenville’s wealthy friend and comic foil (Rupert Everett) invents one; by the way, the sight of three men in frock coats and goggles testing the device is one of the year’s funniest scenes. Obviously, some poetic licence has come into play respecting the film’s historical backdrop, but the misbegotten knowledge of our forbears is funny, so it works.

This film is built on a winning premise. Clueless Victorian doctors politely declining to use sexual language while performing a “pelvic massage” on well-to-do ladies orgasming in layered petticoats and stirrups is comedy gold, generally because it is overtly sexual while pretending not to be. The characters on screen (excepting outspoken Charlotte) don’t know, won’t admit, or can’t say that something sexual is happening, so they go to great lengths to avoid mentioning it, even if that means dismissing an orgasm-induced kick to the gut as a “side-effect of treatment.” As a result, this film has more double ententres per minute than any other film in history; if there’s a problem, it’s that you can’t watch it with too many people for fear of missing jokes due to riotous laughter.

The film is not set for a release yet, but I suspect it will before long. Easily one of the most buzzed-about films of the festival, Hysteria is sweet, swift, and outrageously funny. When it hits theatres, you’ll come twice.