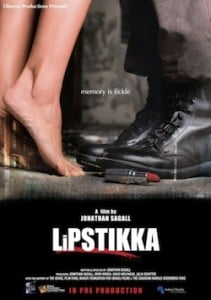 Armed with understatement and nuance, director Jonathan Sagall has created in LIPSTIKKA the sort of film that demands a careful viewing and prolonged digestion. I find myself writing this review several days after having seen the film—not out of laziness, but because I required the time to think it over. It’s the type of thing that, once ended, demands to be experienced a second time in order to be properly understood.

LIPSTIKKA is through-and-through an intimate drama. It takes place in London (at the present) and is intercut with flashbacks (to London in the past and Ramallah further in the past). However, the real setting of the film is the emotional landscape between Lara (Clara Khoury, The Syrian Bride) and Inam (Nataly Attiya, Yom Yom), lifelong friends and erstwhile lovers (young Lara and Inam are played by Ziv Weiner and Moran Rosenblatt, respectively). Of course, this abbreviated description of their relationship is so simple as to be nearly wrong; after all, their relationship the subject of the film, which begins and ends in a simmer.

Of course, the performance of the leads is the cornerstone of LIPSTIKKA. Khoury and Attiya inhabit their parts perfectly; that is, their characters betray considerable depth, but only in brief cracks of carefully controlled surface. Lara gives us a few short words of narration, and that’s all we need—it gives us bearings, but nothing more. The rest of the film is carried by Lara and Inam’s story, augmented by crisp cinematography and a muted colour palette.

That said, the role of memory in a relationship is the subject being tackled by Sagall. Without giving anything away, it’s good that Sagall has focused on that combination. The mutability of memory is a well-trodden if not always well-executed subject. Thankfully, Sagall does not get lost in that tricky subject.

The synopsis for this film on TIFF’s website describes it as an “attenuated drama.” However, “attenuated” is entirely the wrong word. Certainly memory is subject to attenuation, and certainly Lara and Inam’s relationship over the years has become attenuated, but the drama in this film is decidedly not attenuated. It is resonant. Muted, perhaps, but resonant nonetheless.