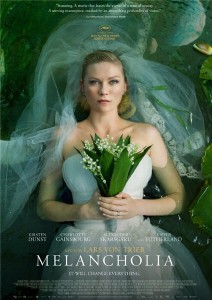 The film opens with a stunning series of living tableaux. As the film progresses, we harken back to these moments. These compositions are crowded with flowers, animals and insects in a parody of a biblical journey. Some bring to mind the world of art and literature, notably the image of Justine (Kirsten Dunst) lying in a swamp in her wedding gown. In this composition she is a dead ringer for Ophelia (in particular from the painting John Everett Millais). This single moment suggests all the madness and, yes, melancholia associated with that role.

Trier also includes Bruegel’s painting, “The Hunters in the Snow,” on several occasions, an interesting choice as the

painting inspires rather contradictory interpretations. On one hand it seems to embody a perfect vision of rural community, on the other, an apparently failed hunt. There is also something ominous about the circling black birds overhead. This single painting completely reflective of the film’s deeply conflicted first part.

As the narrative begins, there is an off-putting sense of jubilation. It seems uncomfortably un-Trier. Dust seems to be in a state of constant of bliss in the first ten minutes of the film. The cracks in her demeanour eventually emerge and suspense is raised as people hint at Justine’s fragile state of mind. Her sister, Claire, in particular tries to stave off her impending breakdown.

The film is very dark and some might find Trier’s misanthropy difficult to bear. Still, his sense of humour has

rarely been as rich as it is here. He not only employs a lot of verbal jokes, but an equal amount of ironic plays and visual puns. The film is laugh-out-loud funny in spite of having some of the most frightening sequences in Trier’s oeuvre. Its sense of humour complicates its apparently negative world view, distorting the reliability of our solemn “preacher” (Justine serves as some kind of medium for the Melancholia planet that is crashing towards the earth).

Melancholia is a difficult film to write about after having seen just once. It is so rich and so alive with complex and beautiful ideas and images that one viewing does not seem enough to do it justice. It is an absolutely compelling piece of filmmaking, and acts as further proof that 2011 is an incredibly exciting year for film.