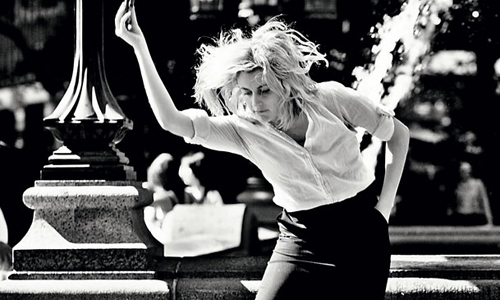 A gleeful, mildly charming throwback to the French New Wave, Noah Baumbach’s black-and-white Frances Ha is the simplest of pleasures, but a pleasure all the same. Greta Gerwig’s titular Frances is essentially an aimless New York City-grounded dance apprentice that shares a comically absurd friendship with hetero-life mate Sophie (Mickey Sumner). Existential woes get in the way as the two undergo an unceremonious falling out, prompting Frances to reexamine her life as she bounces from place to place looking for a sense of purpose.

As a character, Frances is far from unlikable despite her self-deprecating hesitance to make something of herself. She’s bubbly, witty as such and a genuine pleasure to frequently watch interact (often hilariously) with a perfectly implemented cast of charismatic supporting characters. In fact, Frances Ha is more about the people at its core than anything else, priding itself on fast-paced, moreover engaging exchanges between each and every one of them, even if the conflict that drives Frances and Sophie apart is discernibly familiar.

Structurally, the film loses some steam as it enters its latter act while it tends to bounce between locales, partially redeeming itself through artistic usage of David Bowie and company to compliment Frances Ha‘s giddier sequences. All in all, you can’t knock Baumbach for doing what he wanted to do with his own material. The film is equal parts endearing and hilarious, honing in on the relationship between Frances and Sophie with great ease whenever it so chooses and never losing sight of its bare-bones intentions. Its minimalism and quirkiness may turn off some viewers, but for the easy-to-please, Frances Ha is a particularly straightforward delight regardless of its primary shortcomings.