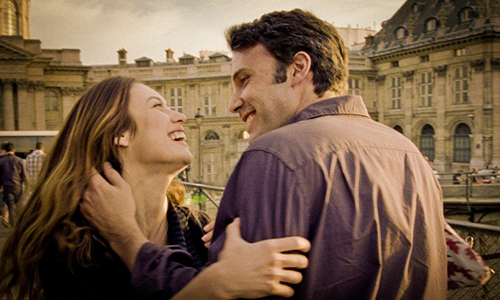 The 2012 Toronto International Film Festival has certainly seen its share of pure passion projects – or obligatory efforts lacking inspiration, it can be difficult to discern that difference – but few festivals will see such an event as the North American premiere of Terrence Malick’s rapidly produced, vaguely drawn To the Wonder. A sad emptiness drifts through what does, as with a certain other huge festival offering, fundamentally defy instant interpretation.

Though recently rumored to have been cut from the picture entirely, Olga Kurylenko’s afflicted Marina loosely anchors the otherwise un-anchored through introspective conflict and a fluctuating relationship with Neil (Ben Affleck). One (including all involved not named Terry) is to wonder what further stories could have been implied through the endless footage Malick captured, including potential expansions on Rachel McAdams’ and Javier Bardem’s characters. To but imply is, however, the decided position here regardless of “story”. What one takes away from Wonder – if anything finite – is strictly up to the individual and their readings in to or emotional triggers found amongst its imagery.

At first meeting, Wonder skews far too close to last year’s definitively lofty and ethereal (to say the least) The Tree of Life, recycling precise compositions and even reusing a shot directly from Tree. Furthermore, where this ostensibly higher-concept former and Malick’s prior offerings have featured introspection well within context, Wonder can instead feel awkward what with the actors’ constant, all too picturesque brood.

Upon short-term reflection, it is easy to forgive these at once discouragingly redundant aspects. The film can appear as a stream-of-thought style outpouring of memory – a cross-section of specific periods of time in the characters’ lives still more so than with Tree – and as such does it persist in memory quite uniquely indeed, as if having been slyly transplanted in to our individual minds. Some images linger without clear reference points while some balls of thread roll away before we can entirely recollect how they eventually unraveled. This particular collective of memory is selective. It has been masterfully selected for us in an editing suite.

For as exactly matched as some content is to its immediate predecessor, Malick’s flowing tableaus often struggle to achieve comparable levels of beauty in their newly modernized, widely unnatural setting. This can be appropriate, however, as from the proceedings it may be gathered: there should be love in these vessels. There should be love, yet in this case where there is none there shall be none – only concrete, only metal, only anxiety. This subjectively interpreted theme becomes particularly apparent through a truly divine final segment after which it feels surreal to see a credits crawl proper.

To aptly respond when questioned on one’s response to To the Wonder is to first spend a brief eternity in silence, jaw agape in attempt to conjure wordless phrases. For better or for worse – perhaps for neither – the experience exists outside the fashions by which many of us perceive film, whether in more traditional senses or no. Had it appeared in a Tree of Life-less landscape it would surely be easier to accept at face value, but as with any living creature the face only stands to offer so much before we must consider beyond.

Learn more about To The Wonder at TIFF 2012 here and the Toronto International Film Festival here.