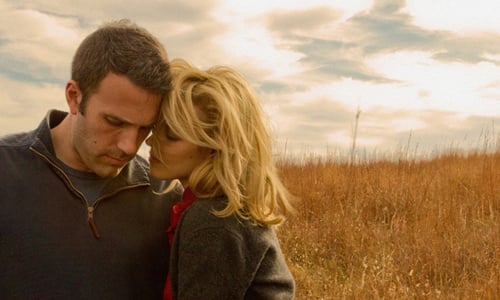 As a discernibly spiritual companion piece to The Tree of Life, many with either be pleased or displeased to know that To the Wonder, Terrence Malick’s latest, fits the bill perfectly. Remaining lofty even by the reclusive auteur’s standards, what stands before us greatly challenges both patience and perception as viewers watch events unfold. As for substance, the film is, for all intents and purposes, a tale of love lost amid interspersed faith-inspired tidbits, examining the plight of two troubled lovers.

Characteristically beautiful if more of the same, To the Wonder‘s dreamy atmosphere and imagery mimic the obscure minimalist feel the narrative possesses, forcing us to sit back and interpret each sequence as we see fit. What the film suffers from in this regard is its failure to engage in the ways The Tree of Life did, with To the Wonder not being as profound in tackling the ideas at its core, at least to a similar degree.

Choreographed movement is once again a trademark element as dialogue, narration aside, is almost nonexistent. Subsequently, To the Wonder fails to wholly engage, prompting one to expect the world of it only to be let down as events unfold rather timidly. The proceedings maintain their artistic integrity however, exuding a Malick-like poeticism as Kurylenko’s character visibly unravels along with her spouse, each of them reaching their respective breaking points early on and throughout.

Enter Javier Bardem’s Father Quintana, i.e. the more challenging part of this particular project, to questionably throw us for a loop as we ponder the significance of his involvement and/or his link to Affleck, Kurlenko and McAdams’ characters. His musings, strictly spiritual, deal primarily with the existence of a higher truth and his intervention in our everyday lives – a possible link to fate in relation to unceremoniously squashing long-term relationships. Bouncing back and forth between these not-so-disparate story arcs quickly becomes tiresome however, as challenging turns to lifeless in the prolonged blink of an eye.

Unmistakably, To the Wonder flaunts Malick’s brand through and through. A visual smorgasbord of vast, almost alien landscapes, European locales and non-verbal artistry benchmark this particularly open-ended production, demanding that the viewer walk away having formulated their own interpretation of its sometimes cryptic disparate elements.

Learn more about To The Wonder at TIFF 2012 here and the Toronto International Film Festival here.