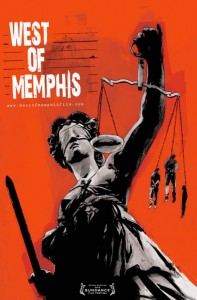 Joe Berlinger and Bruce Sinofsky’s Paradise Lost is frequently, and rightfully, cited as one of the most powerful and influential documentaries ever made, both for the real-life repercussions of its advocacy, and for its use of the documentary format to immerse us in a toxic political and social culture that was willing to sacrifice justice if an easier resolution seemed viable. Nearly two full decades since Damien Echols, Jason Baldwin, and Jessie Misskelley were found guilty of murdering three young boys in cold blood, filmmaker Amy Berg (Deliver Us From Evil) offers her own take on the case, one which adopts a radically different formal approach from Berlinger’s landmark film, while acknowledging how instrumental that film was in galvanizing the movement that ultimately freed the men in question after 18 years of unjust incarceration.

The facts of the case, for the uninitiated: in May of 1993, three second-grade boys were found dead in West Memphis, Arkansas. They had been stripped naked, and were covered in ghastly injuries. Not long afterwards, Echolls, Baldwin and Misskelley were charged, then found guilty, mostly on the basis of a contradictory “confession” by Misskelley, whose mental capacities are generally acknowledged (including by the boy’s father) to be below average. After the release of Paradise Lost, a national movement to get the men freed began in earnest, with musicians responding with particular intensity thanks to Echols being stigmatized at the trial for being a social outcast and an avowed metal fan. Finally, after innumerable legal setbacks, the three were freed in August of 2011, thanks to a particularly devious legal maneuver devised by prosecutors: the three entered an “Alford plea,” which is technically an admission of guilt, but one that allows them to simultaneously maintain their innocence, while also preventing a retrial, thus sparing the state of Arkansas from future embarrassments, not to mention potential lawsuits. Paradise Lost adopted a passionately subjective approach, using Metallica’s “Sanitarium” as its theme (a favorite of Echols’s), placing us in the shoes of these three then-boys as they faced an injustice they could barely fathom. West of Memphis is a more conventional film in many ways, but that’s not to say it’s less effective. Talking heads dominate – be they victims’ family members, celebrity supporters/financiers (producer Peter Jackson, Eddie Vedder, Natalie Maines, Henry Rollins), and of course the Three themselves, particularly the eloquent Echols – and Berg generally opts for a linear approach as she charts the case from inception to pained “conclusion.” This approach is less emotionally devastating by design, but it allows for a clear-headedness and inclusiveness that has its own rewards. Berg even manages to take the Berlinger/Sinofky films (briefly) to task, noting that the second film in the series fingered John Mark Byers as the likely culprit; Byers was later ruled out, even becoming one of the Three’s most outspoken supporters.

The greatest advantage of having a single documentary that spans the entire length of the case (with the crucial, sad exception, of course, of the true killer or killers bring charged) is that it allows us to get a better grasp of just who the Three are, how they’ve evolved, and what freedom means to them. Echols is the most familiar, and his evolution from the spiteful kid grinning outside the courtroom to the wizened married man who sees no future in the place that condemned him remains touching. Baldwin and Misskelley also get their due, though, with the former emerging as a bit of an unsung hero for his remarkable feats of principle. While the true perpetrator remains at large – though West of Memphis certainly does its best within extra-legal limits to identify a culprit – Berg’s movie offers an epic, nuanced take on “crowdsourced” justice and individual bravery that manages to transcend our own possible familiarity with the players.