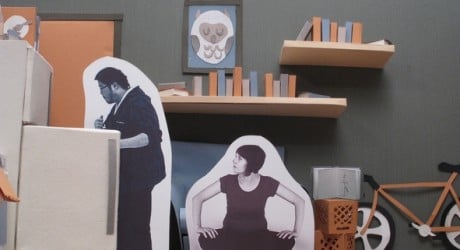 Short films are a medium often forgotten. It’s not every day that you go to the cinema to see a few short films instead of a feature-length film. Even less often than that do you get to see the work of young, burgeoning filmmakers. They’re not exactly amateurs but they haven’t made it yet. But on May 24th, that is exactly what you can come see at the TIFF Bell Lightbox Theatre in Toronto. TIFF celebrates young student filmmakers with its 8th annual Student Film Showcase. Featured are twelve short films from student filmmakers across the country.

These films vary in length, tone, subject matter, even language. Some are animated, some aren’t. Some are amusing little stories, others are grim documentaries that explore human suffering and loss. What they all share are fresh and interesting new cinematic points of view.

Though clearly these films have all been chosen for a reason, there were a couple of standouts for me. My Name is Mitch is a melancholy day-in-the-life story of a birdlike man. Beautiful and sad, the animation and tone are reminiscent of Sylvain Chomets’s films The Triplettes de Belleville and especially The Illusionist. Without copying, the film made by Sheridan Institute student Michelle Yoon has made a thoughtful animated feature. Another standout is OCAD student Sarah Rotella’s Bramula, a darkly hilarious claymation story of a vampire turned cat who just wants to drink his owner’s blood. Paso Doble is a very short but visually beautiful animation by Sheridan Institute Jamie Metzger. Its vivid colours and sharp animation are exciting, even for just the brief moment that it lasts. Finally, another standout for me was Shuffleboard Kings, the longest in the bunch. Made by Capilano University student Chris Aitken, it tells a sweet and surprisingly hilarious story of a senior shuffleboard team that just needs one more win and the rookie shuffleboarder that might get them there.

These are just a few of the films in the selection. All of these student films were clearly carefully crafted and are a promising look at what will be in store for us in the coming years in terms of new Canadian films. Above all, these should not just be looked at as student pieces but as the short, fresh pieces of cinema that they are.

Check these and the rest of the films out today, May 24th at the TIFF Bell Lightbox and on Thursday, May 26th at Pacific Cinémateque in Vancouver.

Support the event by purchasing tickets online, by calling 416-599-TIFF, or by dropping by the TIFF Bell Lightbox at 350 King St. W. T. Tickets are on sale now.