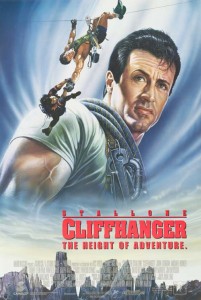 Cliffhanger grips you from the start.

The film opens with Gabe Walker (Sylvester Stallone) scaling up the side of a mountain without the aid of a harness.

Once he reaches the peak, he comes across a couple, Hal and Sarah (Michael Rooker and Michelle Joyner), both of whom happen to be his friends.

Hal, an experienced climber himself, has broken his leg while they were on a climb, leading Gabe to come save them.

With the help of his girlfriend, Jessie (Janine Turner), Gabe is able to tether a line between a rescue helicopter and the precipice where they are precariously stranded.

Using a harness, Hal is able to pull himself to safety, across the ominous void. But when it’s Sarah’s turn, her equipment fails, leaving her hanging 4000 feet above ground.

In a split-second decision, Gabe throws caution to wind and goes after her, reaching her just as her harness snaps. Arms outstretched, he catches her, but as time and gravity fights against them, his grip begins to weaken.

Sarah pleads for her life, not wanting to die, but as her hand slips out of the glove that Gabe was hopelessly holding on to, she plummets to the ground, ending her life and irreversibly changing those of the people involved.

With an opening scene of such thrilling quality, Renny Harlin’s Cliffhanger promises a white-knuckle, adrenaline-packed experience. With a number of entertaining set pieces, the film achieves in that regard, but poorly written characters and a lack of strong human elements make Cliffhanger a capable joyride of peaks and valleys.

When the story picks up a year after the event, the once confident Gabe has become incredibly maudlin, wracked with guilt and regret over not doing enough. His relationship with Hal and Jessie has deteriorated since.

At the same time, a man named Eric Qualen (John Lithgow) and his minions mastermind a plan to hijack a plane with $100 million on board. In one of the most breathtaking and expensive aerial stunts in cinematic history, the plan goes belly up, leaving the surviving would-be millionaires lost in the middle of snowstorm.

With the use of an emergency radio, they are able to contact Jessie, whom elicits the help of Hal and Gabe to ‘save’ them, unwittingly putting all three in danger.

Along with the two aforementioned scenes, Cliffhanger has a myriad of other set pieces that make it a jaw-dropping spectacle. With vertigo-inducing heights and snow-covered vistas, the film, quite rightly, exploits all the beauty that the Rocky Mountains have to offer.

But for all the impressive visual on the surface, Cliffhanger lacks a distinct heart, mostly due to the poorly written nature of the characters.

For example, after Sarah’s death, Hal blames Gabe, even though it wasn’t his doing. It was Hal’s fault for bringing an inexperienced climber along in the first place, plus, Gabe did the best he could in the circumstance he was put in.

Hal’s assertion that his plan would’ve worked better (which, given the time it took for her fall, wouldn’t have), added to his condemnation of his friend’s unsuccessful attempt to save her, immediately makes us dislike him. When he is later taken hostage, we don’t really root for him in the way the film intends us to, mostly because of the way he was written.

In regards to character building, the film only makes a token attempt with most of them, believing that an English accent will conciliate the lack of lucid understanding or personality. Most of them are stock, and there are even a few, including two teenage daredevil, whom are completely arbitrary and needless.

Lithgow is interesting enough, channeling Alan Rickman’s Hans Gruber, but Stallone is the most human of all the characters, showing vulnerability unseen since his roles as Rocky and Rambo.

But as the superb action kicks off, all of the film’s characterizations and human elements are put on hold. Stallone et al don’t gradually come together and reconcile their differences because of realizations during the action sequences. Rather, they are forced back together at the end.

With remarkable action, Cliffhanger proves itself to be incredibly cool, but with a lacking detail to the characters, the film is also incredibly cold.