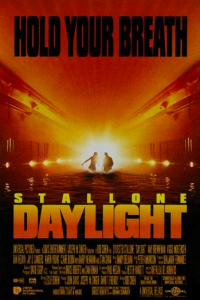 People will say that there’s always a light at the end of the tunnel. That may be true, but what’s in between and inside said tunnel is often drab, dingy and fairly lackluster. Such is the 1996 action adventure film, Daylight, a film with a promising premise that all but succumbs to its misplaced ambitions at pathos.

In it, Sylvester Stallone stars at Kit Latura, a man with a highly colourful name but a personality of predictable stock. Kit is a now New York City cab driver with a disgraced history as chief of the city’s EMS, but was fired from that position for something that wasn’t entirely his fault but was blamed for. Although a bit down on his luck, deep down, Kit is actually a pretty swell guy, who wouldn’t hesitate for a moment to become the hero again.

He gets his chance one night while driving a pair of patrons towards the Holland Tunnel. A few minutes before he gets there, a group of diamond thieves try to evade the cops by driving into the tunnel, only to lose control. The resulting crash causes a pyrotechnic set piece of remarkable proportions, causing most of the tunnel to collapse and trap commuters.

Upon arrival at the scene, Kit’s inner hero comes out and he dutifully starts to drag everyone away from the rubble and to safety. His instincts kick into further gear when he learns that there are survivors still trapped inside the wreckage. Determined to save them, he embarks on a one-man rescue mission to bring them out.

The people he tries to save seemed to have been picked by focus groups. They all come from different social backgrounds and are varied in terms of different ethnicities and genders, but more than anything, they fall under character stereotypes.

Although many of them have background stories, they are used strictly in a casual fashion, aiming to add nuance that isn’t further explored. For example, there is a family of three, consisting of a father, mother, and daughter. It’s made clear that the father had had an affair with someone that caused strife in the family, but after the explosion, it’s hardly ever brought up again.

The same goes for the Viggo Mortensen character. A rich, adrenaline-junky type, the movie will provide a back-story for him, only to drop it abruptly in the early second act.

None of the characters are ever given any real dimension and, more often than not, they will foreshadow their own demise with extremely cliché dialogue.

We are encouraged to feel for their collective situation in the tunnel, but because we don’t really give a damn about them, we don’t. The movie will use a dog for cheap sentimental value, to make us care a little bit, but again, this attempt is desperate. Even worse, the movie will treat the deaths with such sappy reverence that it feels incredibly manipulative, trying to elicit sympathies that are undeserved.

With such a dearth in character investment, Daylight plays out as a simple, soulless disaster-escape movie, albeit with occasional moments of great effect. It never has the gumption to be full on entertaining, like The Poseidon Adventure, nor does it have the tact to be an emotional piece of pathos, like Titanic. The real failure of Daylight is its attempt to be both.