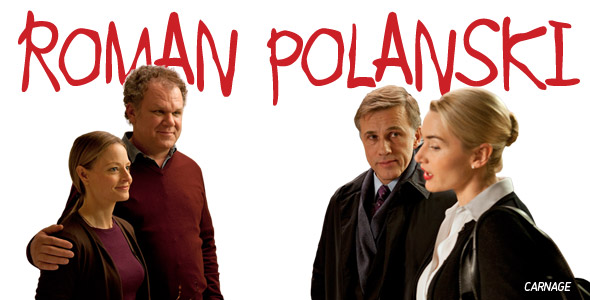 This weekend sees the start of a new retrospective at the wonderful TIFF Bell Lightbox in Toronto. In anticipation of Roman Polanski’s upcoming film, Carnage, TIFF has decided to highlight a selection from his filmography. The retrospective is incomplete, missing at least a couple key films in the long career of the established, controversial director, but the offerings on hand are indeed great. The series begins with Knife in the Water on the 17th and continues through the 25th with a screening of The Ghost Writer. In between, there are screenings of Chinatown, Cul-de-sac, Repulsion, The Tenant and Rosemary’s Baby.

Chinatown and Rosemary’s Baby are quite popular even in the mainstream, though the chance to see them on the big screen is not something to pass up. Even better, though, is the chance for the uninitiated to check out Polanski’s earlier work.

Here are a couple highlights you surely shouldn’t miss. Knife in the Water

Roman Polanski’s first feature, made in his native Poland, is a remarkable debut. As assured a first film as any you’re likely to find from a great director. The film follows a husband and wife on a sailing trip. Before they get to their boat, they pick up a young hitchhiker and bring him along. What ensues is a psychological drama of sorts, a battle of wills between the husband and the hitchhiker as they compete for the attentions of the wife. Things take a turn when the husband thinks he’s accidentally killed the young man by throwing him overboard.

The steady character study in Knife in the Water is impressively deft. The film isn’t a thriller, but it does play on the tension between people. It’s a dark film and one that anyone interested in Polanski’s work should seek out.

Knife in the Water plays at the TIFF Bell Lightbox on Saturday, December 17th at 9:00pm Polanski’s second film, and first in English, Repulsion, is perhaps his masterpiece. It’s a psychological horror-thriller that has shaped the genre from decades. The film follows the Catherine Deneuve as a young woman slowly losing her mind, mainly in the setting of her apartment. The brilliance of the film lies in that progression into insanity. Polanski pulls out all the stops, finding inventive ways to represent her delusions through disturbing shots and fantastic special effects.

If you’ve seen Black Swan then you have seen the modern descendent of Repulsion. That descent into madness represented through filmed delusions owes a great deal to Polanski’s landmark film. But Repulsion has yet to be equaled, even by the likes of Black Swan. The film is deeply unsettling, even to a modern, desensitized viewer, primarily because the techniques Polanski uses don’t hinge on the special effects, but the manner in which they are employed through careful shot selection and editing. The film builds and builds into a crescendo of madness and horror like few other horror films ever have since. It’s a must see, to say the least.

Repulsion plays at the TIFF Bell Lightbox on Wednesday, December 21st at 9:00pm

Of course, all these films are being shown in the lead up to Carnage, which begins its run at the Lightbox on December 30th. Polanski’s latest film, Carnage, an adaptation of a Spanish play, casts four of Hollywood’s best working actors in a situation where they are the only four characters in the entire film. Polanski is playing to his strengths by keeping things small, and the fact that the characters seem completely incapable of leaving this one apartment makes it an exhausting, claustrophobic affair. But Carnage isn’t a thriller. In fact, it’s an uproarious comedy, one of the funniest of the year.

The film features Jodie Foster and John C. Reilly as a married couple who host Kate Winslet and Christoph Waltz, another couple, in order to settle the matter of their young sons getting into a fight on the playground. What results is a hilariously uncomfortable situation in which the couples’ conformity to the pleasantries does not allow Winslet and Watlz to leave. Over the course of about 70-80 minutes things begin to break down. The guise of civility and sociability begins to fail and by the end of the film all the characters have gone at each other’s throats and at least a couple have had serious emotional breakdowns. Again it must be reminded, this is a comedy. It’s a riot. The escalation of the situation, while exhausting almost to a fault by the end, is extremely sharply written and while the outcomes are often predictable, the way the characters speak and react to each other is often hysterically funny.

Who would have thought? Polanski directing a film about four people yelling at each other until they’ve all gone mad and it’s the funniest comedy of the year.

All in all, it looks like TIFF has put together a fine retrospective on an essential director.