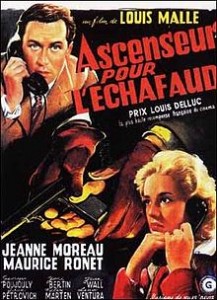 Elevator to the Gallows

As English poet John Lyly once wrote, “The rules of fair play do not apply in love and war”. When it comes to the most primal of human instincts, love and survival, people tend to take an ‘any means possible’ approach to their wish fulfillment, even to a nefarious extent.

Rather than condemning this approach, we tend to embrace it, as an exception to a rule that we would otherwise accept in any other circumstance. We rationalize our moral indiscretions as simply a means to an end – an end that seduces our innermost desires for love and survival.

This expression has become a mainstay in human culture for time immemorial, but leave it to the French to disagree with an Englishman.

The legendary Jean Renoir once masterfully portrayed our habitual hypocrisy in regards to love in The Rules of the Game as well as examining the futility of military action in The Grand Illusion.

He was one of the first to put humanity over the human and society over social convention, another being fellow French filmmaker, Louis Malle.

In his 1958 crime thriller, Elevator to the Gallows, Malle critiques the idea that love conquers all and of war being humankind’s most noble pursuit. But more than that, he tells this in a complex, labyrinth noir.

The story starts off with the film’s only act of premeditation. A man, Julien Travernier (Maurice Ronet), conspires with his paramour, Florence Carala (Jeanne Moreau from The Bride Wore Black) to kill her husband and his boss, Simon Carala (Jean Wall).

Julien resolves to climb up the side of an office building and clandestinely enter Simon’s office. Once in, he confronts him, putting a gun to his head, but Simon is strangely unafraid, even daring Julien to shoot him. But Julien, in turn, is also unafraid.

He is a war veteran who fought in Indochina and in Algeria. He’s experienced the theatre of war and has seen its horrors. He, like Renoir, knows the futility of armed conflict.

Consequently, we discover how Simon is a war profiteer. According to Julien, it is his “bread and butter”, his “family heirloom”. Simon became rich from the wars that Julien fought in, and here is where we have the film’s first political commentary (later, there will be Germans).

Is Malle trying to say that war is just a military industrial complex? That it is fought for the interests of businessmen and not the country? For the betterment of a human instead of humanity?

The particulars of the scene are up to individual interpretation, but once Simon hears this, he quickly changes his tune. He knows that Julien has a score to settle, with someone who sent him to fight in needless wars, ones that have scarred him. He now knows that Julien has cause to kill him. What he doesn’t know is that he has two.

After he kills Simon, Julien covers his tracks by making it look a suicide. He’s about to drive off in his car, on his way to meet Florence, when he realizes that the rope he used to scale the building is still there, an overlooked discrepancy from his crime of passion. He goes to retrieve the rope, and here is where the plot starts to entangle.

Across the street from the office are Véronique (Yori Bertin), his secret admirer, and her jealous petty-criminal boyfriend, Louis (Georges Poujouly). In yet another act of passion, he steals the car, taking Véronique along for the joyride.

At the same time, Julien, while on his way up, is trapped in the elevator when the concierge turns off the electricity for the day. Unable to get out, his absence begins to worry Florence, whose suspicion is further aroused when she sees his car drive by, with a mysterious woman as one of the occupants.

To delve further into the intricacies of the plot would be to spoil it altogether, but it’s suffice to say that the film gets even more intriguing as it goes along. The convolutions are intentional, the twists unexpected, but the film ultimately makes sure that the right people get their comeuppance.

Although remembered as a noir, and rightfully so, the film is actually quite divergent, forgoing some of the formulaic components of the genre. There is no protagonist, no single person to cheer for, and is devoid of the characteristic fatalism. Elevator to the Gallows dares to suggest that justice will prevail.

As well as being a compelling story, the film is also beautifully rendered. With rich cinematography by Henri Decaë and a dazzling score by Miles Davis, the film is a treat for the senses.

But the most praise should go to the acting, especially on the part of Moreau. Although she and Ronet are never in the same frame together, the nuances of her performance make the love between them believable.

In fact, Elevator to the Gallows opens with a profession of love and ends with one. Watching it in entirety, it’s hard not to feel the same feelings throughout. And for the film as well.

Elevator to the Gallows is a part of TIFF Cinematheque’s ‘Summer in France’. For more information and tickets, please visit the official website