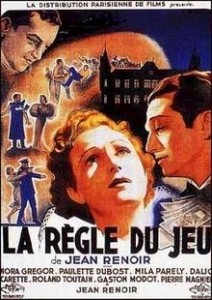 The Rules of the Game

F. Scott Fitzgerald once famously wrote in his 1925 short story, Rich Boy, that “the rich are different from you and me”, to which Ernest Hemingway trenchantly retorted, “yes, they have more money”.

Under the simplicity of this quote and counter-quote parley hides a grain of truth inherent to both. Yes, the rich have more money, and for that very reason, they live differently from the rest of society. With their abundant riches and excess wealth, they can afford to do things most others cannot. For one, they can afford to play games.

Fitzgerald himself masterfully portrayed the hedonistic lifestyles of the rich and famous in The Great Gatsby, and in the realm of literature, it lacks a suitable rival in that regard. But in cinema, the very same notions and ideas were also well accomplished by the storied French filmmaker, Jean Renoir, a man that equally shares an unparalleled distinction.

Unbeknownst to the participants but patently clear to the observers, members of the party are all involved in some kind of elicit affair de Coeur with one person or another. The liaisons are the game at hand, and keeping them secret is the unwritten rule. In a story that unfolds not unlike Robert Altman’s Gosford Park, or a film à la Jane Austen, The Rules of the Game is an uncommonly sharp critique of the French upper class. But instead of being heavy-handed or conspicuously preachy, the film cleverly masks its critique under stories of drama, wit, humour, and genuine pathos. Not to mention the expertly laden imagery and craftsmanship.

In one particularly jarring scene, the group all take part in a collective activity, hunting rabbits and pheasants that are appropriately called ‘game’. Initially, the camera captures the animals in peace and tranquility. Then, under a hail of bullets and desperate for their lives, they flee, most of them unsuccessfully. We are meant to feel adverse to the juxtaposition, and rightfully so. But the group revels in the grotesque and unethical. Surely they don’t need to hunt for food, they are too well to do for that. No, this adventure is simply for their amusement, as an example of how superior they are, an example of their callous disregard for the inferior.

The real source for Renoir’s scathing appraisal of the upper class lies in his portrayal of their sexual politics and bourgeois peccadilloes, and the underlying theme from the hunt translates to their sexual lives.

The bourgeois are superficial and as pedantic about reputation as anyone else, but because they see themselves as above the class of the layman, they believe that that gives them the license to be above the law, especially in regards to sex.

So they create laws for themselves, a tier meant for them alone, one where they can be nihilists in terms of carnal conduct. As long as they don’t break that particular law, then, for them, they haven’t done anything objectionable. Thus, we get the duality, if not hypocrisy.

It’s only when the lowly proletariat is thrust into the picture, namely André Jurieux, the pilot who shot to fame, and Schumacher (Gaston Modot), one of Robert’s workers, does the thin veneer of the bourgeoisie begin to crack.

And when they do, The Rules of the Game takes a turn for the ridiculous, but the film never loses focus of its central thesis. In the labyrinth of a narrative that is the story, Renoir masterfully builds it with bricks of heart, pathos and tragedy.

The Rules of the Game is a part of TIFF Cinematheque’s ‘Summer in France’. For more information and tickets, please visit the official website