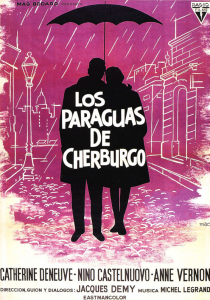 The Umbrellas of Cherbourg

The main concern regarding the two aforementioned tidbits is not the fact that they share common citizenship. No, the point of interest is their running time in the three events.

Although a tad underwhelming at first glance, and a bit unimpressive when compared to Olympic and world records, further context would render their achievements much more admirable.

For you see, they sprinted backwards.

One might ask the inevitable question of ‘why’. Running backwards is a contrived act of difficulty, is largely a gimmick with no substantial improvement to the form, and is generally overlooked as both. But despite all that, one has to admit that it’s still bloody impressive.

As long-winded as this opening metaphor is, it perfectly sums up Jacques Demy’s unrelentingly delectable musical, The Umbrellas of Cherbourg. Obligated to tell a somewhat conventional plot, the film chooses to tell it in an unconventional manner, singing every single word of dialogue and drowning the audience with its sugary-sweet charm.

Before she was Belle de Jour, Catherine Deneuve shot to superstardom as Geneviève Emery, a love-struck 17-year-old that sells umbrellas with her mother (Anne Vernon). The object of her desires is Guy Foucher (Nino Castelnuovo), a rather nonchalant car mechanic with limited ambitions.

With all the symptoms of young puppy love, Geneviève and Guy are inseparable, to the chagrin of Madame Emery. As they both resolve to get married, Guy is unceremoniously called up for military service in Algeria, bringing an abrupt end to their wedding plans and imposing a hiatus on their immediate relationship.

After he leaves, Geneviève discovers that she’s pregnant, a consequence of their last days together before Guy’s departure. Along with her mother’s failing business, Geneviève’s impending child puts a financial strain on the family.

As a result, Madame Emery decides to sell her jewelry to a man named Roland Cassard (Marc Michel), an affluent Parisian jeweler that is immediately smitten with her daughter.

After he makes his intentions clear, Madame Emery urges Geneviève to marry Roland for financial security, forcing her to make a life-altering decision that will affect both herself and Guy upon his return.

Although The Umbrellas of Cherbourg is chiefly remembered for singing every line of dialogue, this approach is actually a case of swings and roundabouts.

Yes, they are singing throughout, but it can be strongly argued that the film hardly has any songs at all. As opposed to a more conventional musical, say Singin’ in the Rain or The Wizard of Oz, there are no clearly defined musical pieces.

In The Umbrellas of Cherbourg, all the singing melds together into one amorphous, undistinguishable number. Unlike Singin’ or Oz, you’ll be hard pressed to find a memorable song of lasting effect – a ‘Somewhere Over the Rainbow’, for example.

Added to that, the film’s excessively servile adherence to singing absolutely everything makes it somewhat unrealistic and uneven, by musical standards as well. Every word is sung, including when somebody asks for directions, making the film feel awkward and stilted at times.

It can feel like they’re singing because they have to, not because they need to. Instead of singing when there are moments of genuine emotion to be had, the movie will often have characters sing trifle conversations. It can quickly feel redundant and overplayed for some.

But despite this, and maybe because of it, The Umbrellas of Cherbourg still manages to be a rousing piece of romanticism. The narrative itself is mostly lugubrious and maudlin, excluding the happy-go-lucky first act, telling the story of a disconsolate romance.

Geneviève eventually makes her decision by the second act, causing the viewer to reevaluate the concept of love conquering all, that love and happiness are not mutually exclusive. The story will unfold into a heart-tugging, melancholy affair, leaving one emotionally exhausted.

As bits, a musical number in a film can kindle feelings of kitschy delight, and the fact that The Umbrellas of Cherbourg never relents in this regard points to the notion that the picture is embracing this sentiment with unabashed verve. One almost has to applaud its audacity.

The Umbrellas of Cherbourg is a contrived act of difficulty, is largely a gimmick with no substantial improvement to the form, and may be overlooked by many as both. But despite all that, like the ability to run backwards, one has to admit that it’s still bloody impressive.

The Umbrellas of Cherbourg is a part of TIFF Cinematheque’s ‘Summer in France’. For more information and tickets, please visit the official website