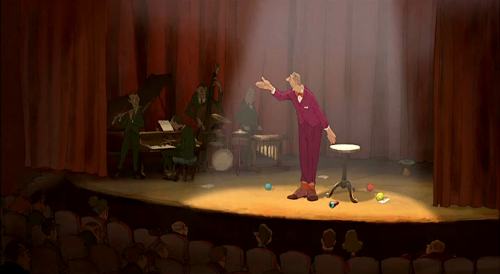 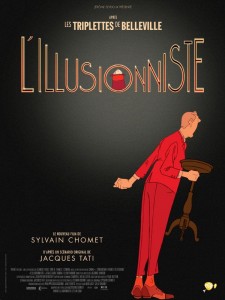 The Illusionist arrives with a spot of controversy up its sleeve. The fact of its being based upon an unproduced Jacques Tati script is more widely known than the alleged truth of its initial inspiration, which, according to Tati’s descendants, is insultingly ignored here. It is said that Tati wrote the script partly as a letter to the daughter he abandoned, that its tale of a surrogate father who nurtures a poor teenager and ultimately reveals the facade of his performing persona was Tati’s way of amending through art the failures in his life. Director Sylvain Chomet’s animated adaptation doesn’t exactly heed this, nor should it. Chomet is not Tati, and as such that film cannot be made. His The Illusionist is no less ingenuously an exquisitely rendered, charmingly wordless lament of a changing world.
– 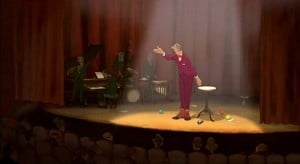 Considering this, Chomet has not chosen to isolate Tati from his version, and in fact a Monsieur Hulot-esque magician named Tatischeff is our main “protagonist.” The film is thus more accurately a delightful combination of their arts, not only an homage to Tati’s great cinema (including Mon Oncle, Play Time), but in being so, a work that empathises with Tati’s content, and indeed embodies it in its very form. To elaborate, the film follows Tatischeff to Edinbrough where he hopes the people will appreciate his antiquated stage craft during a time when rock ‘n’ roll and modern forms of entertainment have the people’s greater attention. Despite a total lack of exposition (the picture, true to Tati, is near-silent), the message is simple and clear: traditional music hall acts are dying. Tati had performed in this milieu, so his elegy was literally for this art, but perhaps metaphorically also for the silent physical comedy of his cinema which was no longer prolific. At any rate, in looking back at Tati through Tati, Chomet unavoidably cements this other layer to it.
–
And of course there’s Chomet’s preferred and (some might say) old-fashioned 2D hand-drawn animation medium, of which the film is produced. Although 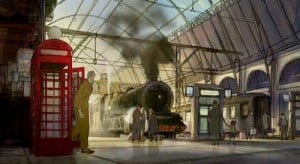 comparisons aren’t explicitly drawn between Tatischeff’s fading craft and Chomet’s at least today far less ubiquitous method of animation, and also considering its sporadic incorporation of 3D digital effects, there is nonetheless a harmony between theme and form that is felt. And what a lovely form it is. Consistently presented in static long shot long takes, every frame is abound with nuance to be devoured at all depths, with the patience to allow each sequence to develop its own rhythm and mood. Taking aboard Tati’s sensibilities has brought a subtlety and humanism to Chomet’s work far removed from the Searle-esque grotesqueness of his well-received The Triplets of Belleville and earlier short La Vieille Dame et les Pigeons, both eccentrically designed but otherwise fairly empty.
–
That being said, none of The Illusionist‘s set pieces are as elaborate and inventive as many found in Tati’s pictures, which furthermore didn’t have the benefit of animation’s greater degree of control. However, one inspired moment here stands out, and without spoiling it, involves our magician and a cinema. When the film comes to a close it does so beautifully, with a melancholy winding down supported by Chomet’s own delicate score, it’s the most touching note in this uniformly graceful piece of filmmaking.