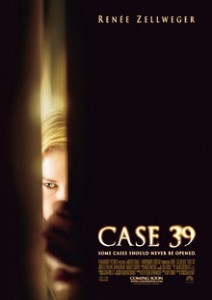 The trailer for the much delayed horror film Case 39 is finally here. Directed by Christian Alvart, the film stars Renée Zellweger, Jodelle Ferland and Ian McShane and follows a family services social worker Emily Jenkins (Renée Zellweger) who thinks she has seen it all… until she meets 10-year old Lilith Sullivan (Jodelle Ferland) and the child’s cruel and dangerous parents. Her worst fears are confirmed when the parents try to harm Lily, their only daughter. Frightened for her life, Emily enlists the help of Detective Mike Barron (Ian McShane) and takes Lily in while she continues the search for the perfect foster family. Just as it seems as though Lily is on her way to a more loving home, under the guidance of Emily and psychiatrist (Bradley Cooper), dark forces surrounding this young girl come to light and, little do they know, their attempts to protect her will only bring on greater horror.

The film has received mostly negative reviews and currently holds an 22% ‘Rotten’ rating on Rotten Tomatoes based on 27 reviews, with critics describing the film as “universally terrible”, “dumb” and “not scary”