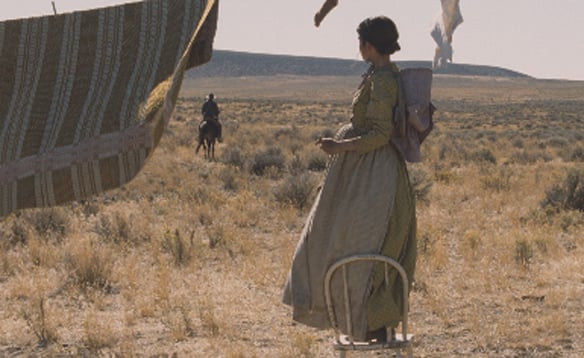 Old Joy and Wendy and Lucy established director Kelly Reichardt as one of America’s most distinctive cinematic voices. Her latest film Meek’s Cutoff marks a major departure, moving away from the no-budget aesthetic and trying on a period setting. Set during the early days of the Oregon Trail, the film tells the story of three families who find themselves lost in the middle of the desert. Upon meeting a Native American that says that he can help them, however, they don’t know who to trust. Here is the trailer.

Apple has the trailer in HD.

The year is 1845, the earliest days of the Oregon Trail, and a wagon team of three families has hired the mountain man Stephen Meek to guide them over the Cascade Mountains. Claiming to know a short cut, Meek leads the group on an unmarked path across the high plain desert, only to become lost in the dry rock and sage. Over the coming days, the emigrants must face the scourges of hunger, thirst, and their own lack of faith in each other’s instincts for survival. When a Native American wanderer crosses their path, the emigrants are torn between their trust in a guide who has proven himself unreliable and a man who has always been seen as the natural enemy.