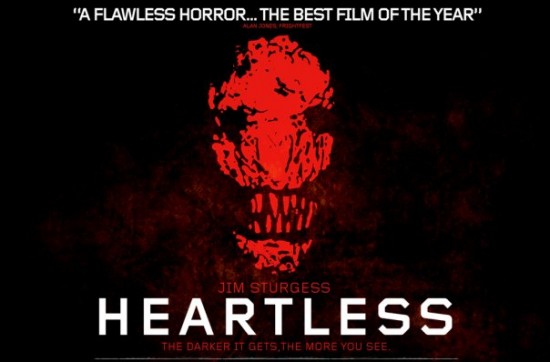 Yahoo’s UK division has premiered the official trailer for Philip Ridley’s Heartless. Heartless is the long awaited return of The Reflecting Skin director Philip Ridley to the world of feature films. His last film, The Passion of Darkly Noon, was released way back in 1995. HEARTLESS is the menacing and magical tale of Jamie (Sturgess) born with a heart-shaped birthmark on his face. Shunned by those who find him repulsive, the photographer’s son lives in a part of London’s East End notorious for gang violence. When his mother is viciously murdered, the media reports it’s by a hoodie wearing a devil mask. But Jamie soon realizes the thugs aren’t wearing disguises at all; they really are demons and hell on earth is beginning to plague the capital city.

Philip Ridley’s two short films – Visiting Mr. Beak (1987) and The Universe Of Dermot Finn (1988) – were soon followed by his highly acclaimed screenplay for The Krays (1990) and his feature film debut as both writer and director, the highly controversial The Reflecting Skin (1990), which won eleven international awards, and was voted one of the Best Ten Films of 1991 by the L.A. Times. Rolling Stone went on to describe him as “a visionary” and In 1991 he was awarded the Most Promising Newcomer to British Film at the Evening Standard Film Awards.