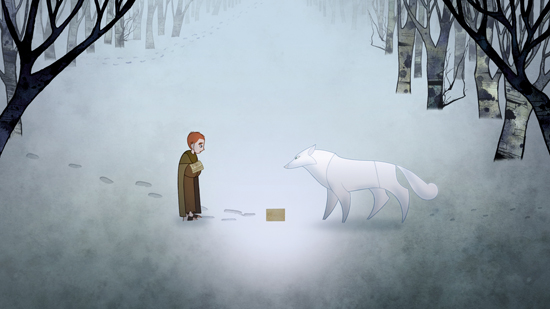 The Secret of Kells surprised just about everyone with it’s Oscar nomination this year. The Irish-Belgian-French animated feature film by Cartoon Saloon (who also created the television series Skunk Fu!) premiered on February 8, 2009, at the Berlin International Film Festival. It went into wide release in Belgium and France on February 11, and in the Republic of Ireland on March 3. On February 2nd 2010, it was announced the film is nominated for an Academy Award for Best Animated Feature Film.

The story is set in the 9th century. Twelve-year-old Brendan is educated by his uncle, Abbot Cellach, who holds a firm grip on his nephew and expects him to follow in his footsteps. One day, Brendan meets Brother Aidan, a master illustrator who shows him the beauty of art and stimulates his creativity and fantasy. Finally, Brendan decides to break free in search of his dream: completing the valuable Book of Kells. On his journey through the forest, he has to face his biggest fears.

It is safe to say that with the heavy competition this year which includes Pixar fave Up, The Secret of Kells has little hope in taking home any gold. Still it’s always nice to be introduced to a hidden gem especially from an event like Academy Awards which seems more about who’s who than what deserves to win.