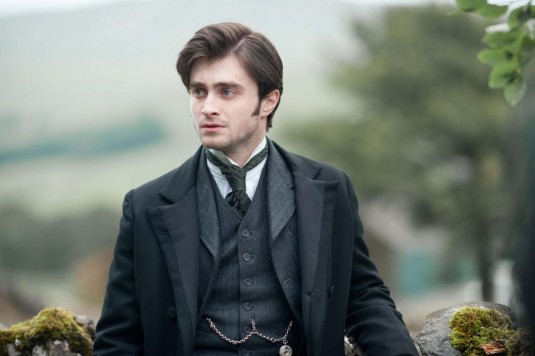 In September 2010, Hammer Films and Alliance Films began production of a film adaption of the 1983 thriller fiction novel The Women In Back by Susan Hill, about an insidious phantom that haunts a small English town. Recently, a short but effectively creepy teaser was released for the movie, which stars Daniel Radcliffe (Harry Potter himself) in the main role of Arthur Kipps. The film was already made into a TV movie back in 1989 but now an adaptation from director James Watkins (Eden Lake) is set to hit the big screen on February 10, 2012. If you haven’t seen Eden Lake, you should, and then you might understand why this film is on my must-see list. In short, Eden Lake made an excellent directorial debut for Watkins, and I’m pretty confident that he’ll do a great job in adapting what is already a great story.

Here is the plot synopsis:

A young lawyer (Radcliffe) travels to a remote village to organize a recently deceased client’s papers, where he discovers the ghost of a scorned woman set on vengeance.