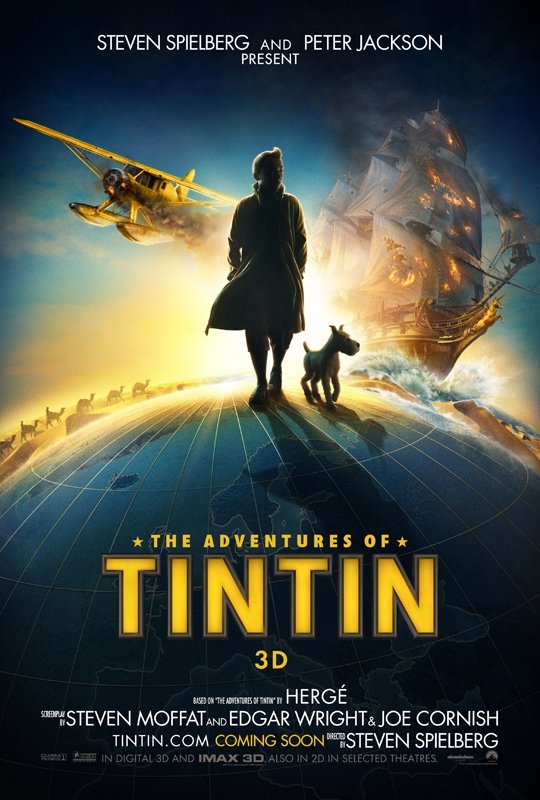 Living in Montreal you pretty much have to grow up watching The Adventures of Tintin (Les Aventures de Tintin). Origianlly based on the series of comic strips created by the Belgian artist Georges Rémi (1907–1983), who wrote under the pen name of Hergé and first appeared in French in Le Petit Vingtième, a children’s supplement to the Belgian newspaper Le XXe Siècle. Most North American are scratching their heads wondering why Steven Spielberg would adapt the little guy to the big screen, but the series is one of the most popular European comics of the 20th century, with translations published in more than 80 languages and more than 350 million copies of the books sold to date. Its popularity around the world guarantees it a blockbuster hit regardless if it makes money in the US or not.

Spielberg first acquired rights to Tintin after Hergé’s death in 1983, and combined the stories of The Crab with the Golden Claws, The Secret of the Unicorn and Red Rackham’s Treasure, for the movie. The film depicts Tintin’s (Jamie Bell) first encounter with Captain Haddock (Andy Serkis) and the discovery of a clue to the treasure of his ancestor Sir Francis Haddock. They set out to find it with protection from a prison escapee who tried to get the treasure as well as Detectives Thompson and Thomson (Simon Pegg and Nick Frost)

Yesterday, some great teaser posters arrived, and now they’ve released the first trailer for the film, which debuted over at Empire. The clip really showcases the amazing effects by Peter Jackson‘s WETA Digital, who recently won the Oscar for Avatar. The film stars Jamie Bell, Andy Serkis, Daniel Craig, Simon Pegg, Nick Frost and Toby Jones, among others, and hits Europe on October 26th, and later in North America on December 23rd. Watch the trailer below.