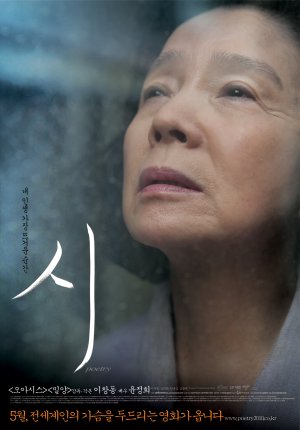 Korean cinema of the past ten years has been absolutely astonishing. Among the many directors finding world fame are Chan-wook Park (Oldboy), Joon-ho Bong (Mother, The Host) and Ji-woon Kim (I Saw The Devil). Well, now it is time to add another director to your radar. Lee Chang-dong won the Dragons and Tigers Award at VIFF 1997 for his debut feature, Green Fish. He has since won awards in major festivals the world over for Oasis (2002) and Secret Sunshine (2007), one of the most talked-about films at Cannes and Toronto, and his new film, Poetry, was awarded Best Screenplay at last year’s Cannes Film Festival along with Best Actress and Best Picture at the Grand Bell Awards. The film also took home Best Directing and Best Actress at the 2010 Asia Pacific Screen Awards.

Now acquired by Kino International, the film is finally hitting shores stateside this year. Here is the official synopsis and trailer for the film:

A sixty-something woman, faced with the discovery of a heinous family crime, finds strength and purpose when she enrols in a poetry class. Lee Chang-dong’s follow-up to his acclaimed Secret Sunshine is a masterful study of the subtle empowerment—and moral compass—of an indefatigable older woman.