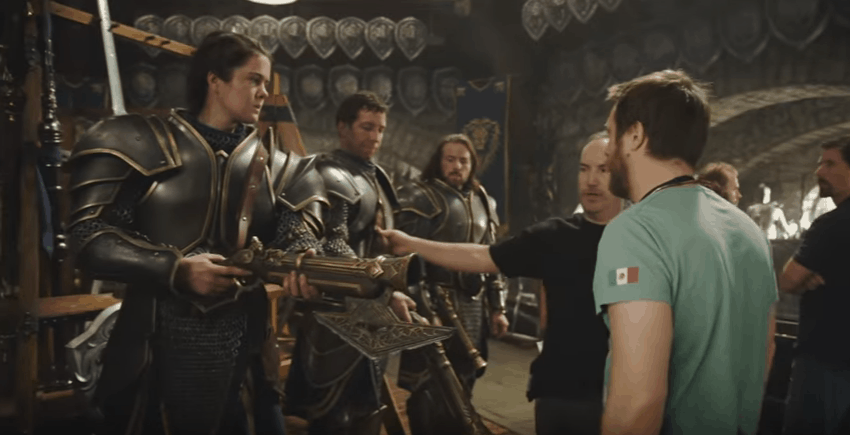 One of the things that struck me as odd and potentially ominous when Warcraft was filming was the almost total lack of set photos, early looks at actors in costume, or really anything physical to do with the film. With prettymuch every big-budget tentpole movie, it doesn’t take too long for someone with a camera to sneak a peek at the film’s visuals, but Warcraft seemed to avoid this. In my mind, I could come up with two scenarios: one, the film has such stellar security that would-bet set photographers get nabbed before they can photograph anything, and two: the film just didn’t have any sets or costumes to photograph. We knew that Duncan Jones’ much-awaited videogame adaptation would be extremely heavy on the CGI, approaching Star Wars prequels levels of bluescreen. But it was hard not to imagine that the set for Warcraft wasn’t just a warehouse and a lot of blue tarps. But as it turns out, there were at least some physical sets for Warcraft, and a new production video showcases one: the armory of Stormwind.

The video shows off actor Rob Kazinsky, who plays one of the film’s orc characters, touring the armory and gushing over the weapons and armor crafted for the film. It definitely looks like the design team behind Warcraft did a great job crafting the film’s props and locations, though I will say the the location and props look a bit on the pristine side, as opposed to live-in and battle-worn. But I suppose that’s part of the aesthetic Jones has gone for with the film, less of the gritty fantasy of Game of Thrones and more towards something shinier.

Check out the video below.