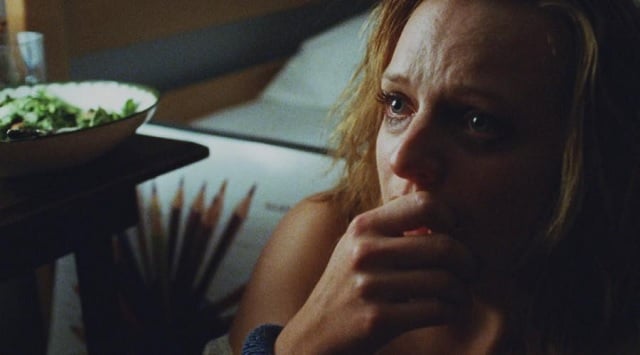 While Elisabeth Moss has been a familiar figure to television fans for a number of years due to her critically acclaimed work on the recently ended AMC series Mad Men, 2014 saw her make her biggest impact on the biggest screen, with key roles in two well-regarded features, The One I Love and Listen Up Philip. Her next film, titled Queen of Earth, sees Moss reteam with Listen Up Philip filmmaker Alex Ross Perry, this time taking on the lead role in the film, which Perry both wrote and directed. The synopsis can be read below.

Recently dumped and mourning the loss of her  father, Catherine (Mad Men’s Elisabeth Moss) arrives at the lake house of her best friend, Virginia (Inherent Vice’s Katherine Waterston). But rather than getting the one-on-one quality time she craves, Catherine is forced  to share Virginia with the latter’s pesky love interest next door, Rich (Patrick Fugit), and spirals further into a self-centered bout of depression.

Katherine Waterston stars alongside Moss, as do Patrick Fugit and Kentucker Audley. With the film set to open in limited release in US theatres on August 26th, the first trailer has now been released, and can be seen below.