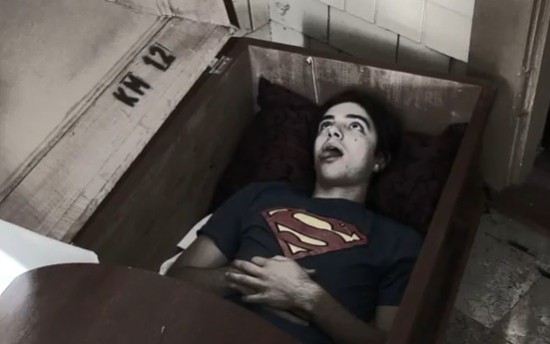 This past weekend Director Josh Trank and screenwriter Max Landis (son of filmmaker John Landis), put a fresh, invigorating spin on the superhero origin story, with Chronicle (read my review). The son of the legendary director has a few screenplays in various stages of production and if they are as good as Chronicle, Sam Landis has a very bright future ahead (listen to our review from episode 307 of the Sound On Sight podcast).

Before Chronicle, Landis created another superhero related film of sorts. Recently his short film The Death and Return of Superman spread like wildfire across the internet when discovered on YouTube. Described as “an educational parody,” the short tells the literal, insider version what happened in 1992 when DC Comics decided to kill, and then quickly resurrect, Superman. The 1992 comic book storyline completed a multi-issue story arc in which Superman engages in battle with a seemingly unstoppable killing machine named Doomsday. The storyline met with enormous success and the Superman titles gained international exposure, reaching to the top of the comics sales charts and selling out overnight.

Check out the the short below which just so happen to feature an all-star cast including Elijah Wood, Mandy Moore, Ron Howard, Chris Hardwick, Simon Pegg and more.