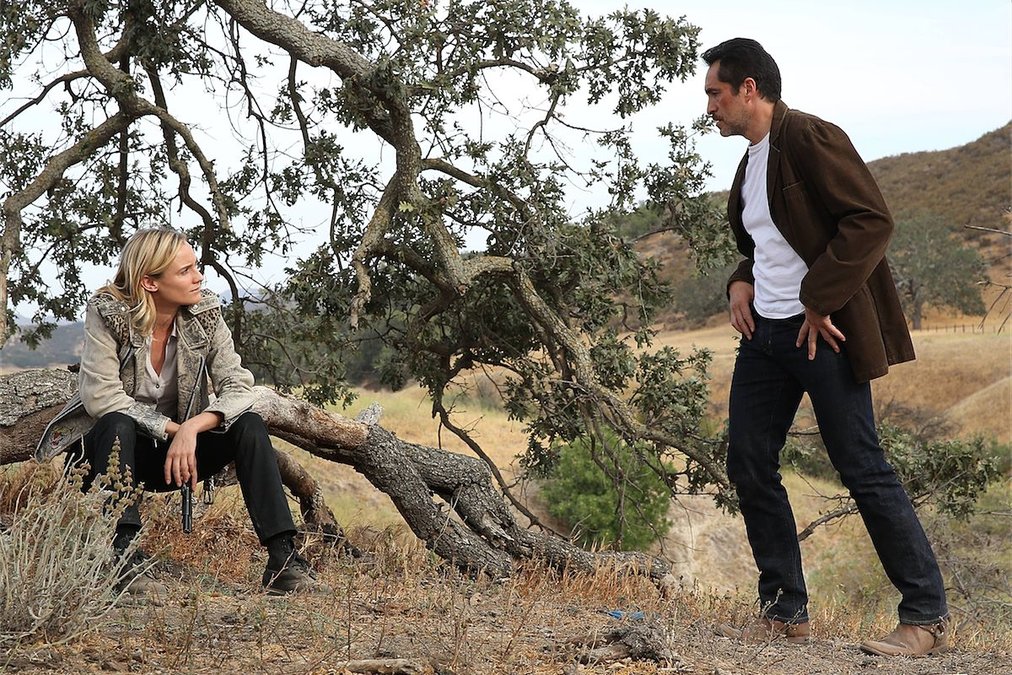 Thanks to spending half a season untangling itself from the messes of last season, “Jubilex” feels like its larger stories are just starting to apex when Sonya happens upon Eleanor in the closing scene: and after the 40-plus minute sprint preceding it, ends the season on a bit of an underwhelming note. 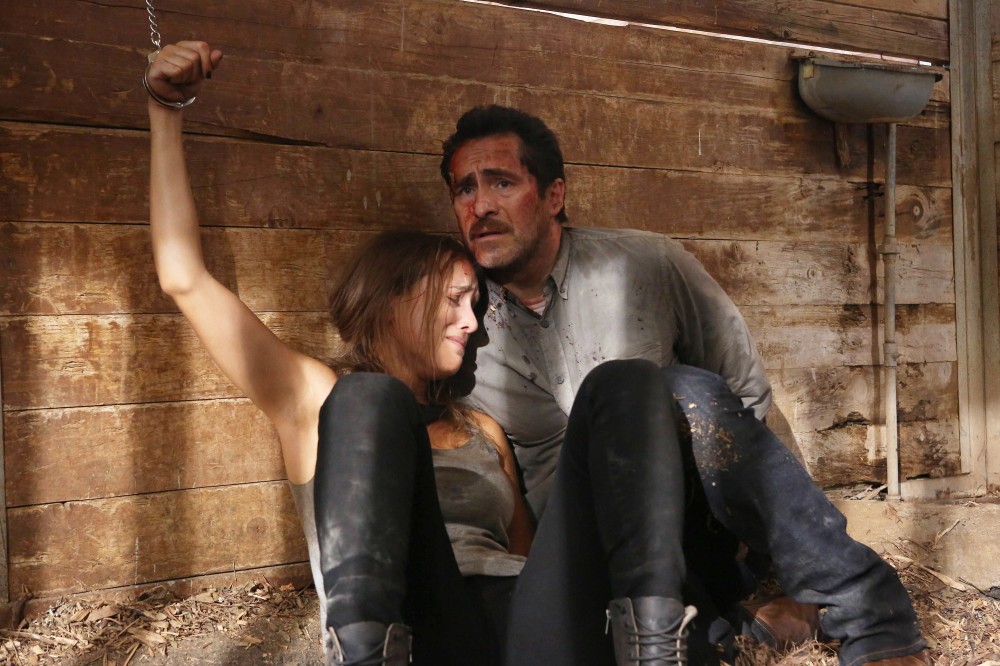 With all the pieces of The Bridge’s second season neatly in place for the finale before “Quetzalcoatl” even begins, it’s no surprise that things don’t really go anywhere in this penultimate hour. Throughout, it feels like a buildup to two big events – Galvan’s Last Stand, and Linder’s Final Act of Vengeance – but neither comes to light in the framework of this episode, an hour that methodically fans the flames of the season’s conflicts, with Eleanor continuing to poke her head in and out from the shadows said fire casts on the metaphorical wall. That doesn’t mean “Quetzacoatl” isn’t an boring hour, though: as the show pauses to consider just how far Galvan’s gone with the approval of the CIA, and how little anyone involved can do about it, The Bridge finally feels like the show it’s always wanted to be, occasional spurts of blood and all. 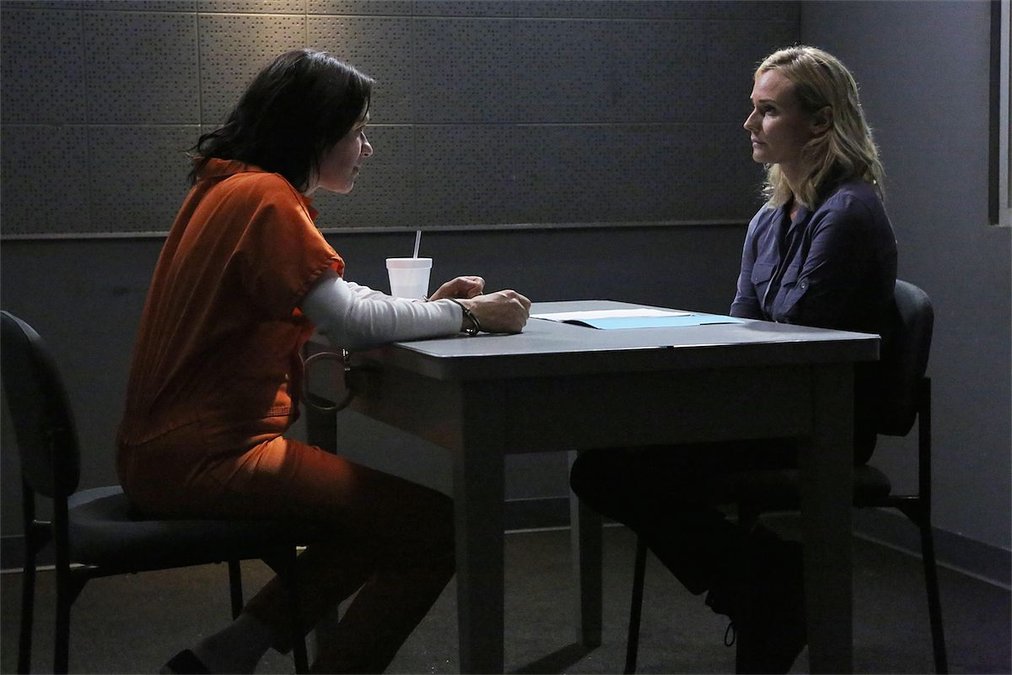 With Nacht’s disturbing behavior finally on the sidelines, “Beholder” doesn’t waste any time getting to the point of The Bridge’s second season – and thanks to the slow burn of the season’s first half of episodes, allows these increasingly dramatic situations to be filled with characters we’re invested in. Marco and Sonya are a given, but did one expect to feel such remorse for characters like Adrianna or Fausto? “Beholder” is an hour consumed by the idea of tragedy: coming to terms with it, trying to avoid it, accepting it as one’s fate or defining characteristic – and with each character taking a long look at what they’ve lost and how it’s changed who they are, “Beholder” delivers one of the show’s strongest hours. 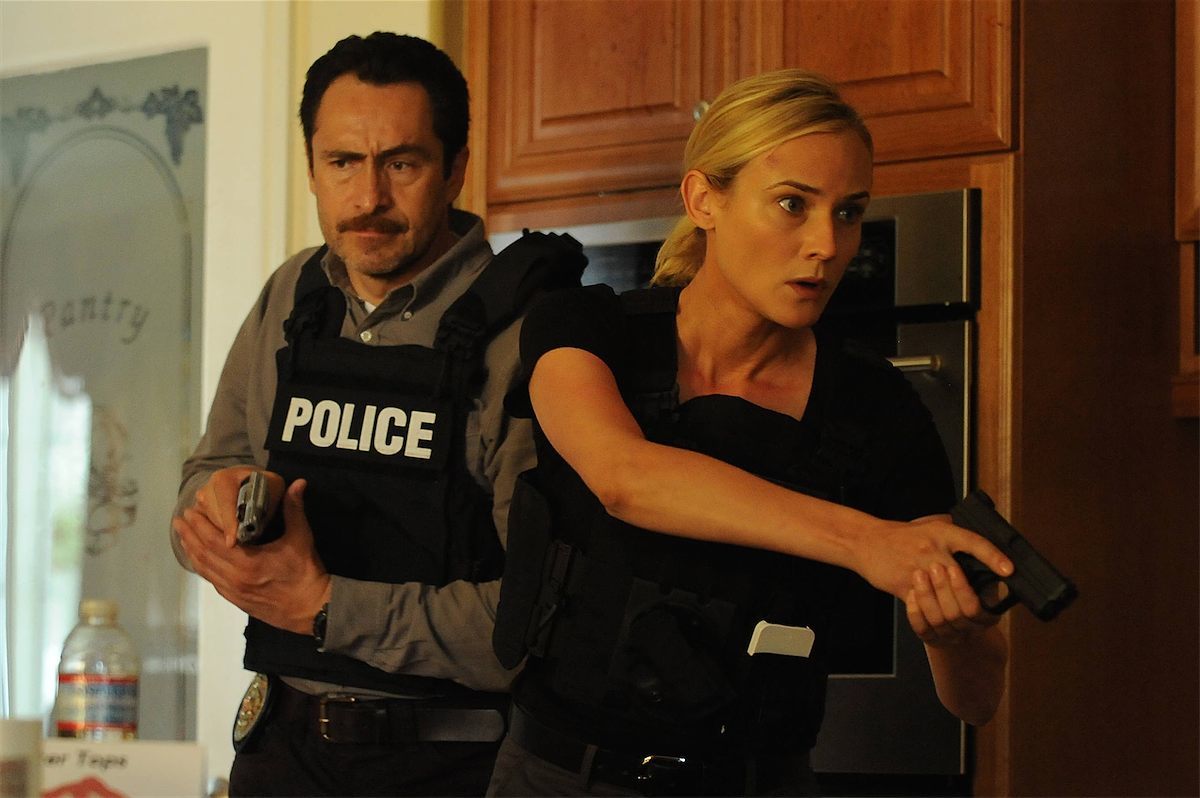 For all the talk around the internet of how The Bridge solved “the David Tate” problem of season one by removing the whole Serial Killer with a Personal Vendetta crap from the proceedings, “Rakshasa” and “Eidolon” both prove – as the entire season has, really – that the show hasn’t really ‘solved’ this issue at all, even after killing off David Tate a few weeks ago. They’ve merely replaced it, morphing a scorned employee of a main character’s wife into a one-off villain whose personality and characteristics are as random as the motivations David Tate seemed to have throughout season one’s episodes. I’m obviously talking about Eleanor Nacht – and while the performance and dramatic storytelling around it continue to be entertaining, her presence is a glaring flaw in an otherwise wildly entertaining two hours of The Bridge. 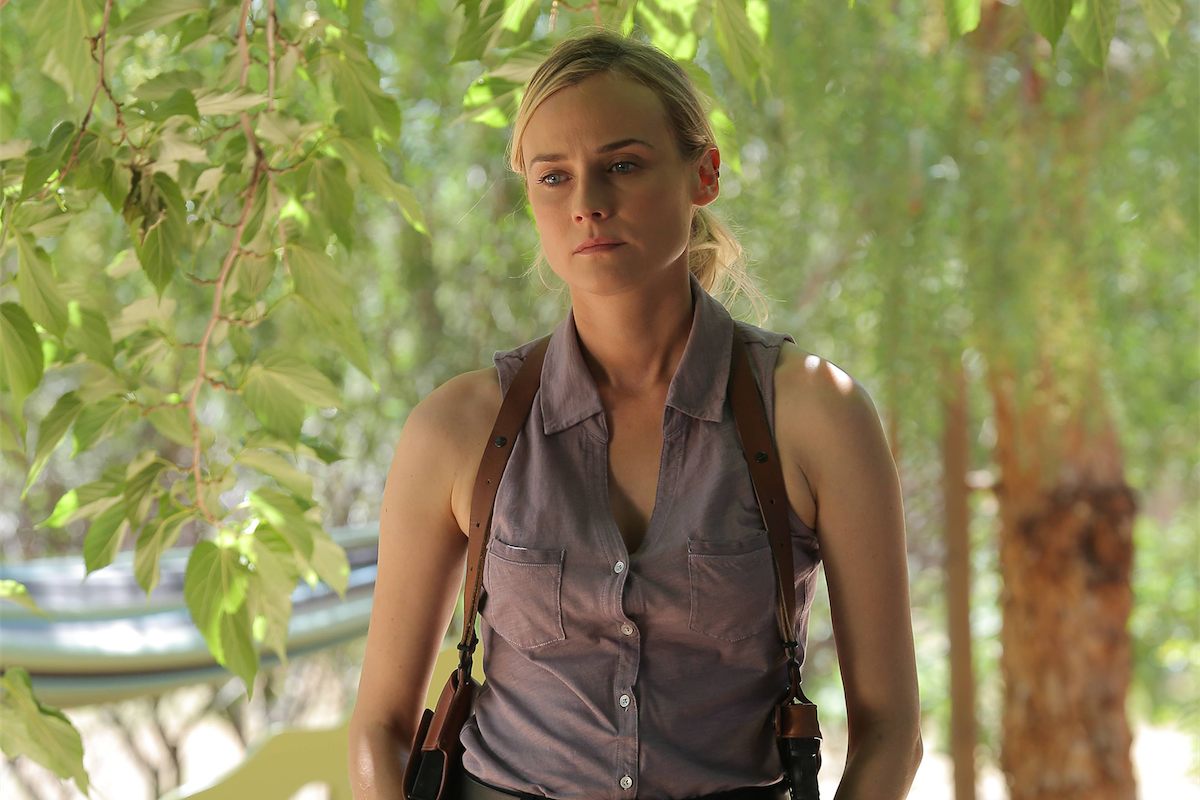 The longer The Bridge’s second season continues, the more a singular thematic thread becomes apparent. Regardless of character, the second season of The Bridge is about the struggles of living in a world of compromise, where morals and traditions fall to the wayside, and everything in life becomes a transaction or an ultimatum. Is there such thing as definitive “justice” in the modern world, or forgiveness? Is there such thing as absolute loyalty, or do the negotiations between politics, personal pride, and business ruin those who refuse to live sitting on the fence? These are the kinds of questions the pulpier, more character-based second season of The Bridge is exploring: and although it’s not quite hitting on all cylinders in “Goliath”, that central idea continues to manifest in fascinating ways. 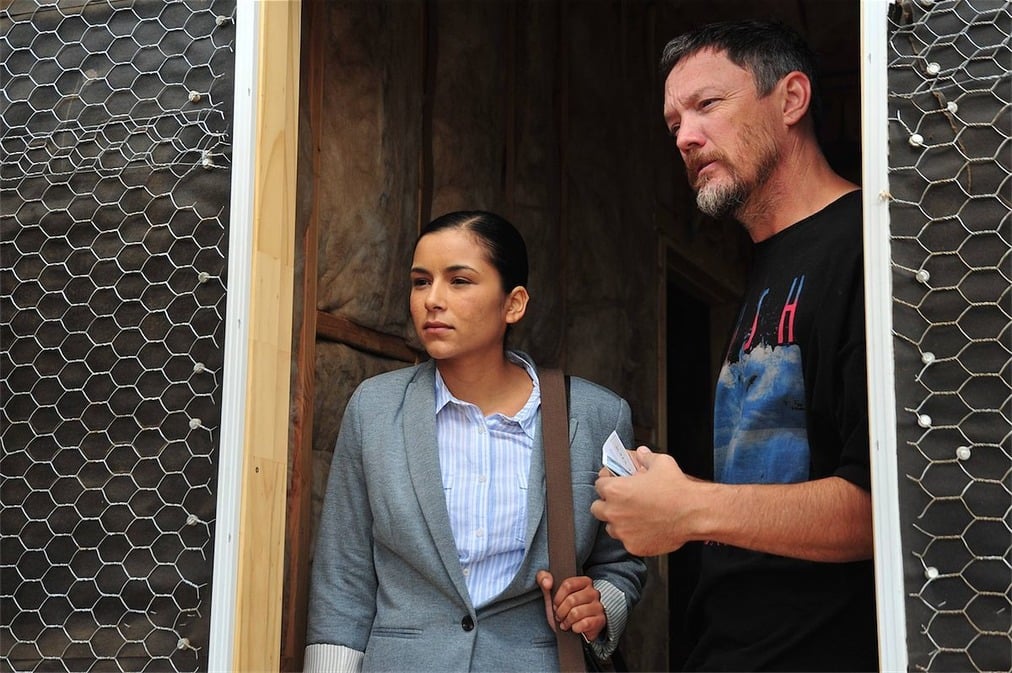 There have been unfair comparisons made in the past between The Bridge and The Wire, but there’s no way not to invoke the latter during the last two episodes of The Bridge, which have seen various characters from both sides of the border crossing paths, at times seemingly at random. And like it often did with The Wire, The Bridge’s use of this narrative device serves a useful purpose outside the plot: it narrows the show’s scope a bit, adding a bit of focus to a sprawling world rich with diverse characters that would otherwise feel like a random collection of stories only related by geography. The more characters on The Bridge enter each other’s lives, the tighter the show’s story and world feel: and in the case of both “Harvest of Souls” and “Lamia”, do wonders to bring focus to the season as a whole, and begin pushing forward to its inevitable climax. 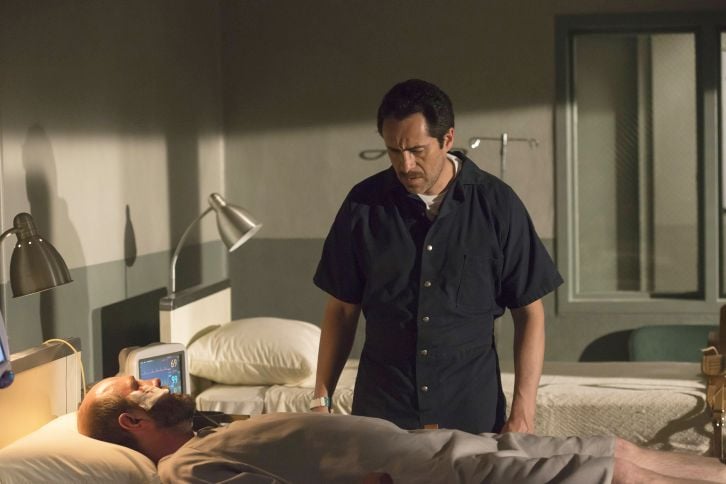 If there’s been a common theme among the main characters of The Bridge, it’s exploring the darker avenues of dealing with great loss. It occurs on both a human level, and with the larger plots at play: while Fausto and his organization scramble from the $70 million loss they just took on the other side of the border, characters like Adriana, Marco, and Sonya are dealing with the loss of family members, and Charlotte and Ray find themselves at a loss for freedom under Galvan’s violently oppressive thumb. And as all these plots begin to coalesce, “Eye of the Deep” reaches farther and deeper than the episodes before it to go out of it’s way painting a group of people reaching their wit’s end with the current state of affairs – and in the process, delivers the best episode of the season so far. 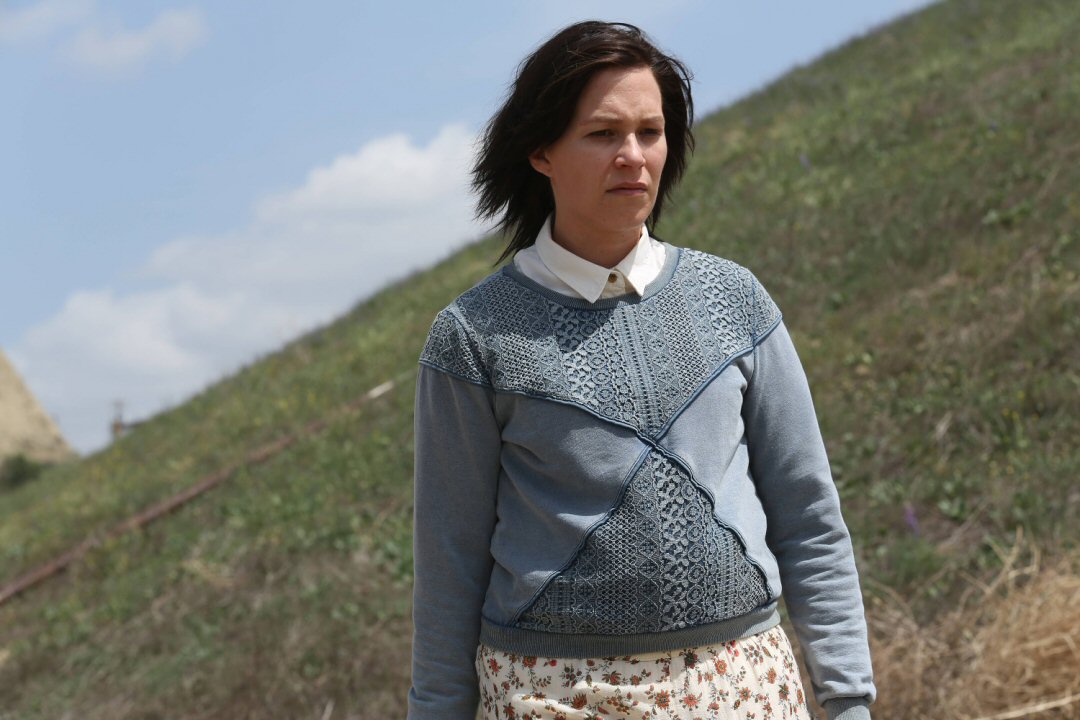 After spreading things out for three hours, “The Acorn” is the first episode of The Bridge’s season that begins to condense its story, connecting dots between Galvan, Eleanor, Marco, and everyone in between. For the first time, it feels like The Bridge has one large snowball rolling down hill gaining steam, not a dozen tiny ones bouncing around aimlessly without direction or momentum. I wouldn’t say it has completely solved it’s identity crisis just yet: but with a few brief, wildly effective scenes, “The Acorn” begins arranging the violent, allusion-heavy pieces on the table, and begins assembling its grand story for the season. 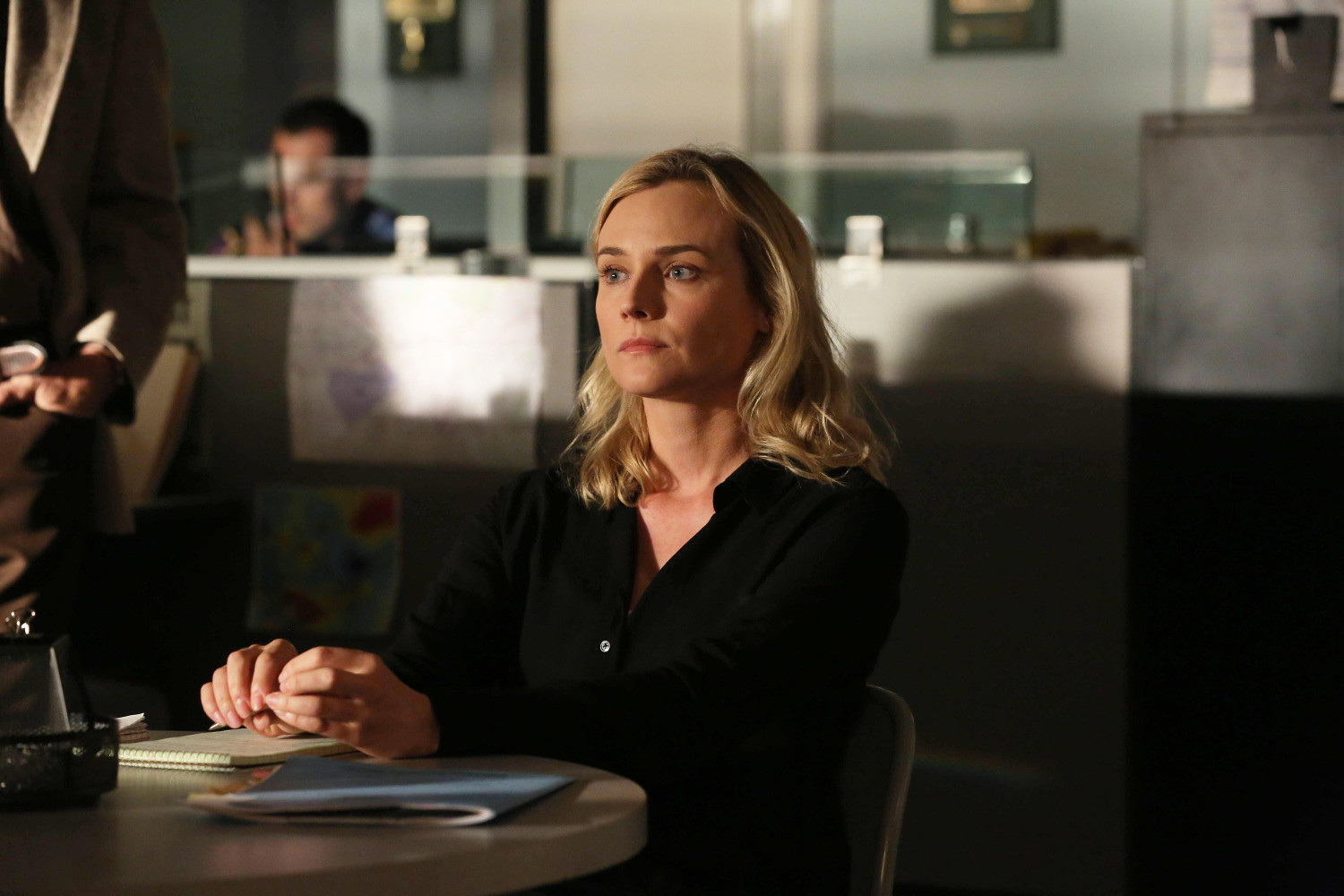 “Sorrowsworn” is an interesting turning point for The Bridge, both in construction and delivery: continuing the trend of the last two episodes, “Sorrowsworn” layers more intertwining characters and stories into the larger story, while at the same time attempting to find intimate moments with characters, an interesting experiment in pressing on the gas pedal while slightly massaging the brake at the same time. It makes for an uneven ride at times, sure, but like last week’s episode, there’s the growing sensation that The Bridge is finding its direction as it transforms, slowly relaxing into its new identity. 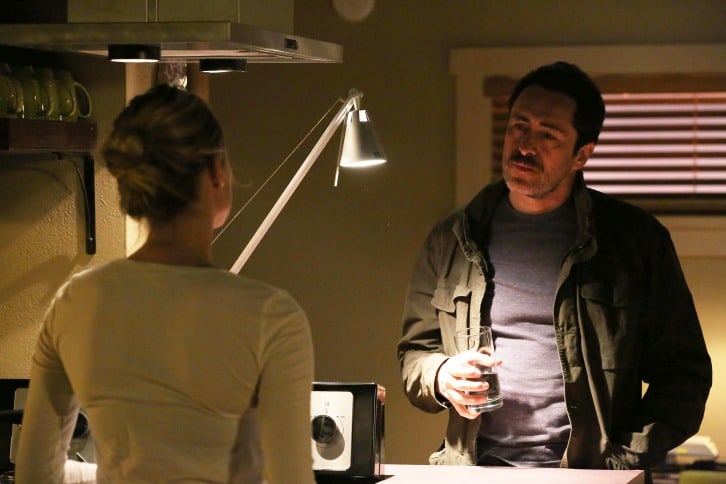 I’m glad The Bridge appears to be getting right to the point in its second season; after a premiere that felt more scatter-brained than carefully orchestrated, “Ghost of a Flea” (mostly) pulls everything back into orbit for a morbid, if slightly over-exerting hour. It still feels like a very different show than the first season, both in plot construction and how it delivers its story to the audience. Is it a better show? Only time will tell: but at the very least, it feels like the show’s beginning to figure out it’s own identity. 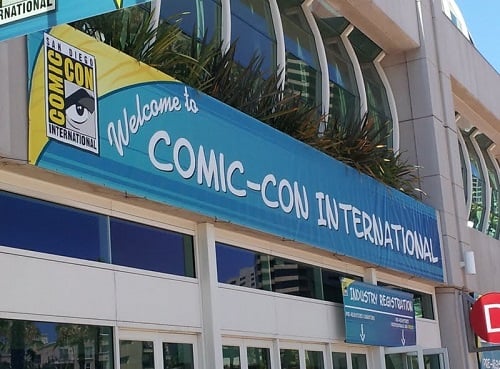 After a week off, the pilots and premieres are back, …

After a week off, the pilots and premieres are back, … 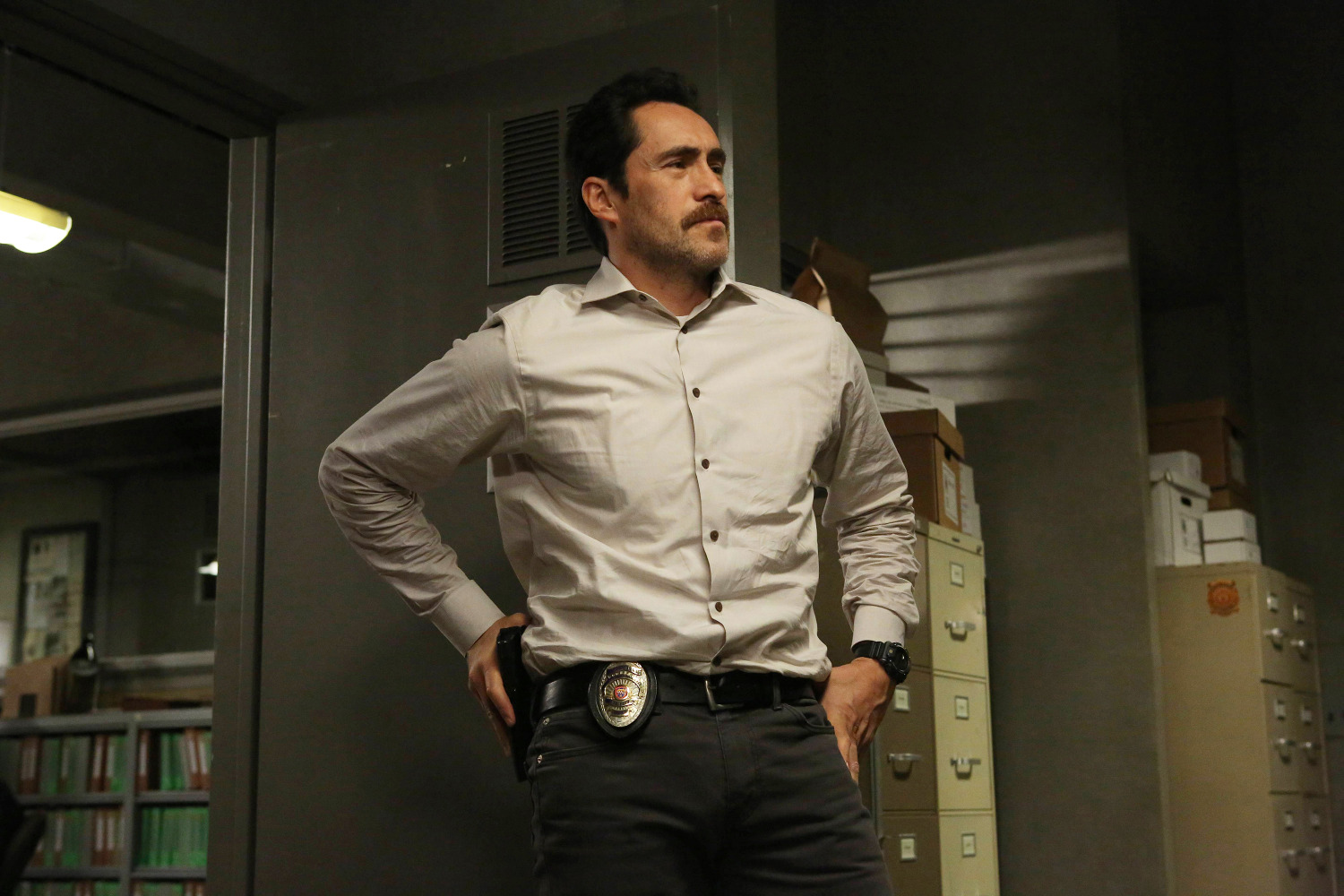 Unexplained pools of blood, assassins, break-ins, and sexcapades mark the opening of The Bridge’s second season, an uncomfortably scattered hour that only seems to prove this show still hasn’t figured out what it wants to be. A jumbled mess of familiar and new faces dealing with both new and familiar problems, “Yankee” is an hour that ignores major plot threads from last season (if only for the time being) in order to introduce a plethora of new ideas, without giving the audience much sense of direction as to what this seemingly random collection of scenes actually means. Is it intriguing? Sure, there are parts of “Yankee” that suggest this season of The Bridge could head in some interesting directions: but surrounded by so many other plots and characters, it’s unclear what this season actually wants to be about. 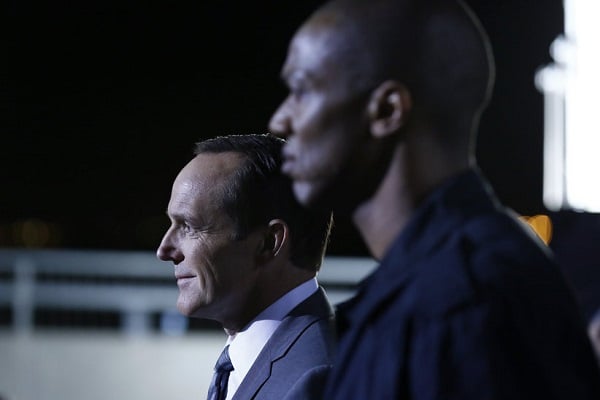 “The Bridge” is the first season’s hastily-constructed bridge from the pilot episode to the end of the season. It gives the illusion that the season has been building to a confrontation with Project Centipede when it has really meandered with single episode story arcs and false trails. Mike Peterson (J. August Richards) returns for the first time since the pilot and gives the team what it has been sorely lacking, which is a superhero. Coulson and his team have encountered super-human abilities and even tangled with an Asgardian, but the point of SHIELD as an organization is to protect mankind and provide superheroes like Captain America with what they need to save the world. Without a central figure to rally around, the team lacks a strong direction, even if they have an interesting villain like Centipede. Like Coulson said in The Avengers, people need a little old fashioned heroics, and Agents of SHIELD might need a caped superhero or two at its center to keep it focused. 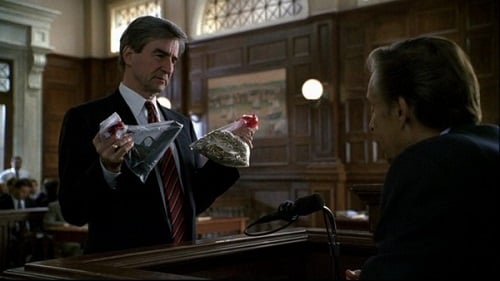 The fall season is fully under way, giving us once …

The Televerse #110- Informed Opinions: Lawyers and the Law on TV Read More »

The fall season is fully under way, giving us once …

The Televerse #110- Informed Opinions: Lawyers and the Law on TV Read More » 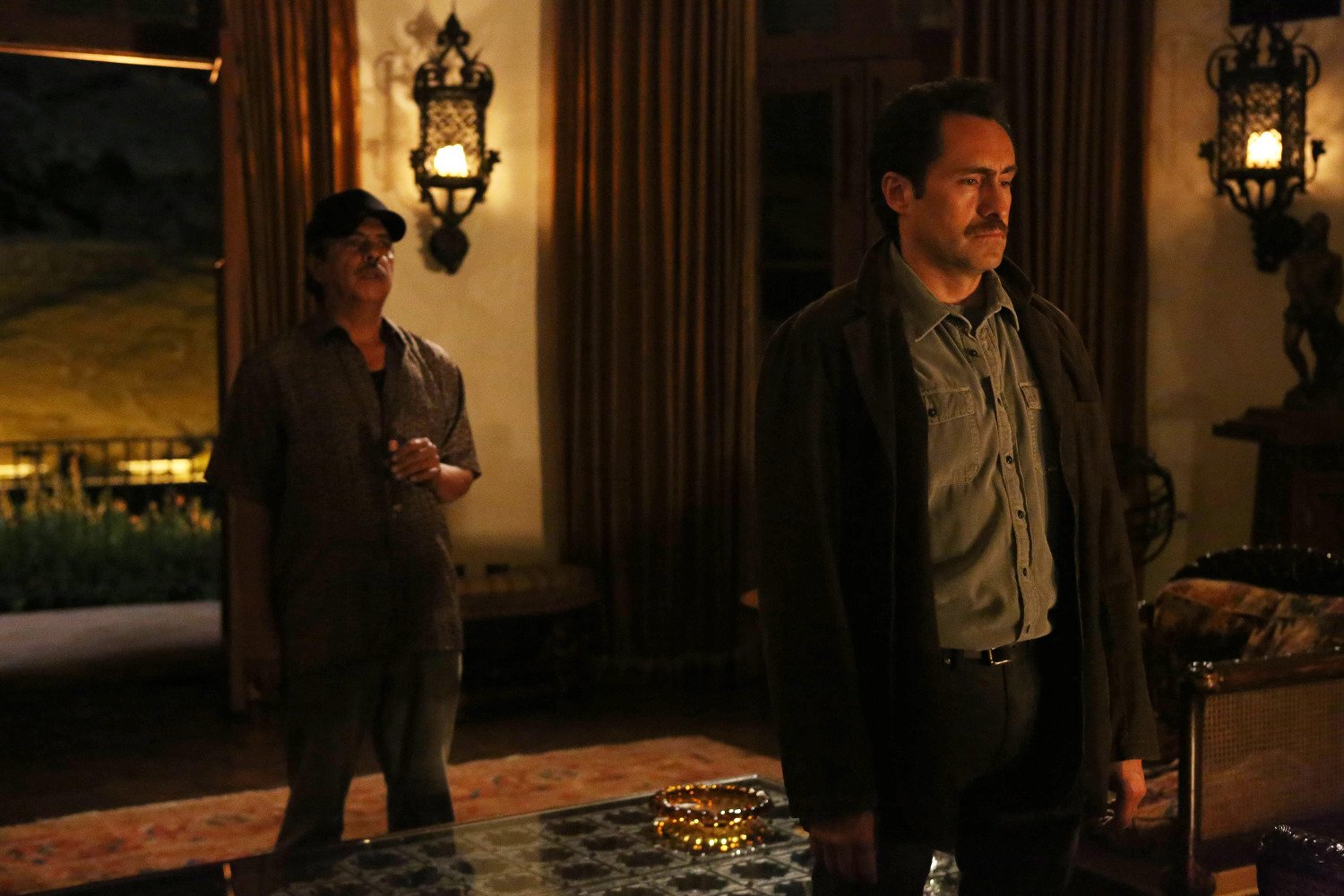 And with a crazy stare from Marco Ruiz, the tumultuous first season of The Bridge comes to a close. At times it was enthralling – and at many other times, frustrating: but always intriguing, even when the show was in the midst of its David Tate nosedive (which unfortunately still exists… but we’ll get to that). ‘The Crazy Place’ is all of that wrapped into one neat 43-minute episode, a series of promising and not-so-promising new directions for the second season. 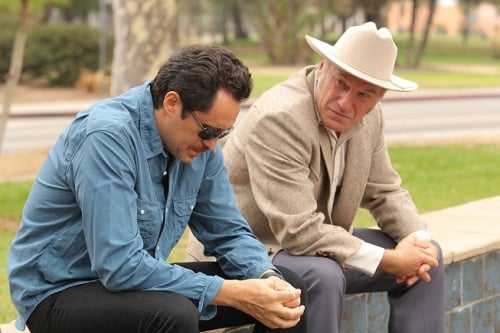 This week’s episode is a crucial one- after “Take the Ride, Pay the Toll” wrapped up the season-long mystery last week, we’re left with only two episodes this season. That’s too much time if the PtB are only going wrap up the hanging threads from the Tate arc and potentially not enough time for them to start something new. For the show to succeed over multiple seasons, though, a new border-spanning case is necessary and we get just that this week with the abduction and rape of Eva in Juarez by a mysterious Texas-plated car. This case feels like a bit more of a stretch for calling in our favorite international crime-fighting team than the half-bodies posed on the literal border, but given our previous relationships with the characters, it’ll work. 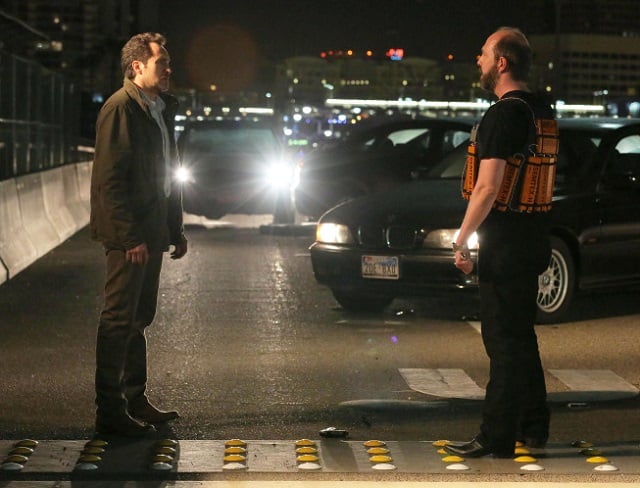 Although The Bridge has struggled with the Tate story line throughout the season, they’ve never run out of ways to use him as an emotional vehicle for Marco Ruiz, bringing their feud to a head in “Take the Ride, Pay the Toll”, a dramatic hour that squeezes every possible ounce of tension out of the final showdown between Tate and Ruiz – and then smartly switches perspective to Sonya as the other shoe drops with a massive clang to the floor. Ironically, the effectiveness of the events on the bridge (and at Tate’s house) only stand to point out the problems so far this season (and challenges that exist in the near future), giving an interesting – if problematic – dichotomy to the micros and macros of the show. 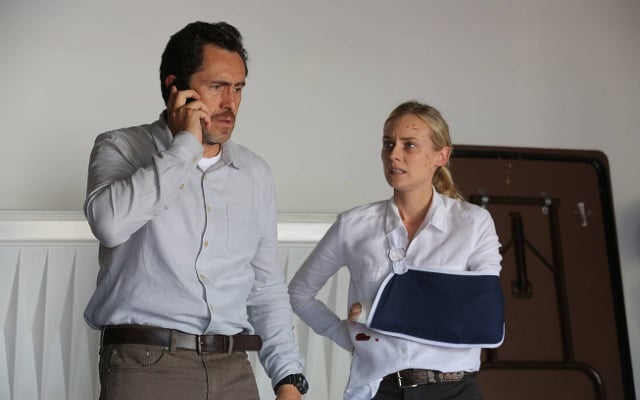 The reveal of ex-FBI agent David Tate as the mastermind behind the rash of cross-border crimes on this season of The Bridge brought the motivations behind the crimes into focus. What it didn’t bring into focus, however, was the machinations of Tate’s plan, nor did it bring Sonya and Marco any closer to capturing him. The effects of Tate’s actions on the police begin to show this week, as Marco and Sonya react differently to the strain Tate put on them, in a solid episode that manages to keep the tension high despite very little in the way of resolution. 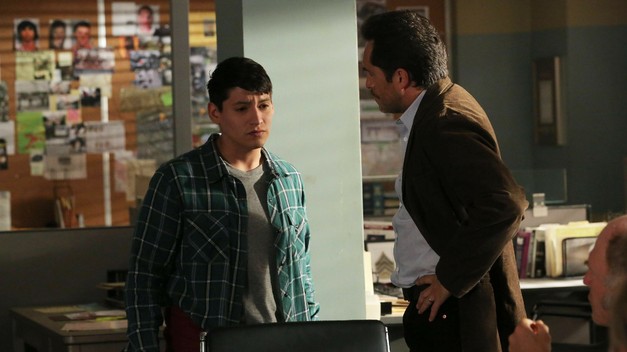