As we approach the end of the decade, it seems fitting that this installment of Undertones concern itself with some of the most memorable film scores of the ‘00s. Though the films range in financial or critical success, and opinions may be divided as to the strength of some of the films as a whole, what these scores have in common is a sound that is entirely unique and detrimental to the filmic worlds in which they inhabit. In other words, like any decent film score they quickly remind us of all the thoughts, feelings and reactions garnered during our initial experiences of the films they accompany. 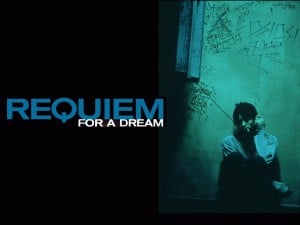 Ask a number of folk what their favorite film score is and there’s a good chance that they’ll reply with Clint Mansell’s string quartet/electronic masterpiece for Darren Aronofsky’s adaptation of the cult novel, Requiem for a Dream.  Performed by legendary string quartet, Kronos Quartet, the score can be broken into four parts that correspond chronologically by season to the film’s narrative. The most memorable cue, the hypnotic “Lux Aeterna” from the ‘Winter’ portion of the score, has subsequently been used in numerous advertisements, television shows and film and video game trailers in its original form as well as in adaptation. Most notably, the ubiquitous cue was reorchestrated for full orchestra and choir for the The Lord of the Rings: The Two Towers (Jackson, 2002) trailer. The piece was only used in the trailer and not in the film’s score and due to popularity was eventually released as an EP entitled, “Requiem for a Tower”.  Overall Mansell’s score is imbued with a deep sense of melancholy and urgency and, as anyone who has the seen the film can attest, conveys the desperate plight of the film’s ill-fated characters. Mulholland Drive is David Lynch’s expose of the dark world that exists under the fantasy and glamour of Hollywood. The film begins with silhouettes of couples swing dancing accompanied by a cue, “Jitterbug”, written by long-time Lynch collaborator Angelo Badalamenti in the style of a Glenn Miller number. However, the film’s quirky opening is quickly cut short and aided by the change of mood in Badalamenti’s score we are soon back in the familiar nightmarish terrain of the Lynch universe. The ominous score is probably Badalamenti’s darkest yet and it enhances the cryptic visuals and narrative by acting as an emotional guide for the viewer. An overwhelming sense of dread is felt in the string writing as we travel deeper and deeper into the disturbed narrative of the film. Channelling the intense darkness that permeates Mulholland Drive, Badalamenti’s score also throws as many twists and turns as the film’s narrative alternating between the dense, languid string writing heard in the opening theme (“Mulholland Drive”) to barely audible audio feedback and even to dinner party jazz (“Dinner Party Pool Music”). In Mulholland Drive, Lynch depicts the dualities of Hollywood; that its world is simultaneously shallow and rich, hopeful and desperate and beautiful and grotesque. Badalamenti’s writing, with its juxtaposition of tortured dirges and jazzy whimsy, helps compliment the theme of corrupted dreams that is central to Mulholland Drive. Quintessentially French due to its use of culturally codifying elements such as the heavy use of accordion, Yann Tierson’s score to ‘Amélie’ is a magical, musical evocation of the titular character’s wanderings and childlike explorations of her native Paris. After being played some of Tierson’s music by a production assistant, director Jean-Pierre Jeunet promptly purchased previous works by the composer and arranged a meeting to collaborate on the film. From the dizzying excitement of the street music sounds of cues like, “L’Autre Valse D’Amélie” to the stark minimalism of contemplative solo cues such as “Comptine D’un Autre Ete”, Tierson’s score functions as a voice for the introverted and predominantly mute Amélie (Audrey Tautou). Removed from the film, the score still manages to conjure up images of Amélie’s world within le fabuleux destin d’Amélie Poulain; a place full of wonder, excitement, simple pleasures and fascinating people. Having previously worked on Magnolia (1999) together, composer Jon Brion and director Paul Thomas Anderson collaborated once again for the off-beat romantic comedy, Punch-Drunk Love. The film’s score can be split into two markedly different kinds of musical material used to underscore the narrative concerning the film’s lonely protagonist, salesman Barry Egen (Adam Sandler). Firstly, a score of eclectic percussion instrumentation and electronic blips is employed in scenes in which the disgruntled Barry appears to be at boiling point or on the verge of a complete mental breakdown. Brion’s score doesn’t merely reside in the background but breaks the rules of film scoring all together by occasionally obstructing the dialogue occurring on screen. In one scene in which Barry must tackle one of his seven interrogative sisters, abusive phone calls from a woman trying to extort money out of him, and the general chaos of his warehouse working environment, the score builds up so subtly into a confusion of incessant percussion and atonal passages that we are unconsciously brought into a state of utter exacerbation much like that of the unhappy Barry. The second major scoring device used in the film, particularly in scenes involving Barry’s love-interest, Lena (Emily Watson), is a saccharine waltz that seems to evoke the scores of corny romantic films of the 1940s and ‘50s. The character of the waltz stands in stark contrast in the score to the aforementioned percussive agitation that surrounds it. Overall, Brion’s score acknowledges that Barry’s way out of his miserable existence is to break out of his repressed state and find the sort of all-consuming, redemptive love that dreams are made of.

5- The Assassination of Jesse James by the Coward Robert Ford (Andrew Dominik, 2007)

It seems that Nick Cave and Warren Ellis have begun to carve out quite the reputation in recent years for scoring the existential Western. Given the cinematic narrative that permeates the music of the rock band of which they are both members, Nick Cave & the Bad Seeds, and the lush soundscapes of Ellis’ instrumental ensemble Dirty Three, it seemed inevitable that the pair would collaborate to work on film scores together. Their first venture, John Hillcoat’s The Proposition (2005) (also written by Cave), saw them scoring for life in the brutal Australian outback of the 1880s. For their next film, Andrew Dominik’s adaptation of Ron Hansen’s 1983 novel, The Assassination of Jesse James by the Coward Robert Ford, the pair was once again working with the subject of the savage wilderness and the meditations of a tormented antihero. The sparse score accompanies the story of wannabe gunslinger Robert Ford’s obsession with the notorious American folk superstar, Jesse James, and the tragic results of his idolization. Consisting predominantly of strings, celeste and piano with the occasional use of guitar and percussion, the score is haunting and melancholic; a constant reminder that the film, as suggested by the title, will not end well. An overwhelming sadness penetrates the entire film due to the combination of the finely measured performances of Casey Affleck and Brad Pitt in the title roles, the gloomy cinematography of Roger Deakins and of course, the pathos-laden score by Cave and Ellis. The score does not only function as a requiem for the mysterious Jesse James, it is also a window into the thoughts of the deeply disturbed Robert Ford. What Cave and Ellis’ score truly conveys in ‘Jesse James’, is the metaphysical weight of a man who is struggling with his own identity and purpose, forced to live in the shadow of a legendary figure larger than life itself.

Other memorable scores of the ‘00s:

– The Lord of the Rings: The Two Towers (Jackson, 2002) composed by Howard Shore

– Catch Me if You Can (Spielberg, 2002) composed by John Williams

– There Will Be Blood (Anderson, 2007) composed by Jonny Greenwood
– The Dark Knight (Nolan, 2008) composed by Hanz Zimmer & James Newton Howard