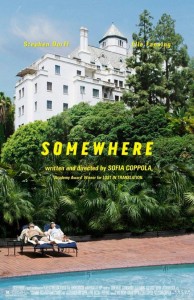 “An existential comedy with a skewed vision of the cult of celebrity, Somewhere knows where it is, and those that find it will be glad they did.”

I think it’s fair to say that the work of Sofia Coppola is an acquired taste. Whilst the woozy romanticism of her cherished Lost In Translation garnered her lavish praise and a Oscar for best screenplay, her follow-up Marie Antoinette attracted the same accusations as the film’s titular character – that a privileged, upper middle class white woman really had no place whining about the angst ridden dimensions of her mournful, restricted existence. Although her contemporaries are the likes of David O. Russell, Wes Anderson, Alexander Payne and ex-husband Spike Jonze, her work seems more akin to those independent auteurs who achieved notoriety in the early nineties, like Hal Hartley, Jim Jarmusch or Alison Anders – filmmakers who favour a very mannered, potentially alienating style that ejects strong characterization and plot emphasis in favour of a austere, distancing affect, a edgy, detached sensibility which can either attract or repel audiences. Her new film Somewhere, which won the prestigious Golden Lion at Venice, uses these techniques and stylistics find a new apotheosis, although this time Coppola appears to have leafed through the Bret Easton Ellis section of her local Barnes & Noble before heading back to her Antonioni DVD boxed set for fresh inspiration.

Stephen Dorff plays Johnny Marco, a Hollywood reprobate in the vein of Colin Farrell or Errol Flynn who is stumbling 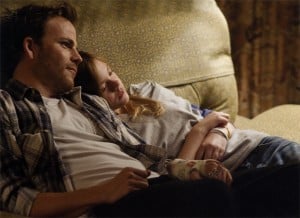 through a life of hollow excess, wallowing in a series of numbing sexual liaisons and tranquilizer-fuelled sloth at the Chateau Marmont when he receives an unexpected visit from his 11-year-old daughter Cleo (Elle Fanning). During her stay their relationship seems tender and warm, although Johnny’s relationship seems more akin to a friend than father. When her mother unexpectedly abandons Cleo with Johnny, citing her own emotional crisis to avert, he takes his daughter with him on a promotional trip to Rome, with all the attendant pomp and pageantry that an ‘A’ list member of Tinseltown royalty is accustomed to. As their relationship coolly evolves Johnny begins to reassess his lifestyle as he contemplates some radical changes.

The obvious beauty of Somewhere will lie in the eye of the beholder – those attracted to a nuanced, slyly evocative if a little too svelte tale will find much to enjoy, others will find it pretentious, pointless and annoying. I found myself in the former camp. Critics who bemoaned the unconscious racism in Lost In Translation (quite memorably cinematographer Christopher Doyle lambasted its portrayal of the Japanese, marking it as ‘the ultimate Bush era movie’ – insular, ignorant and ugly) will have similar ammunition given Coppola’s presentation of the garish and incomprehensible Italians in this movie, but they may be missing the point that Somewhere is actually a comedy of sorts, and its casual satire of those in vogue stretches from the West coast of the States to the centre of Europe. 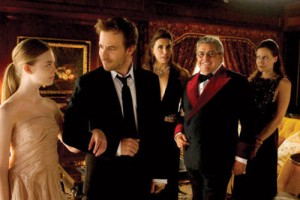 Stephen Dorrf is phlegmatic and listless, sporting his hipster t-shirts (emblazoned with the sigils of the band Black Flag or Sub Pop record label markers) with a nonchalance that perfectly suits the film’s score and ambiance, the likes of Phoenix, The Strokes and Bryan Ferry parading through the soundtrack with the studied ‘cool’ that we’ve come to expect from Coppola. A duo of high level cameos from Michelle Monaghan and Benicio Del Toro add to the subdued charm, and in its distant yet edifying way the film is a subdual of celebrity culture, a mocking of the vacuous world where figures are questioned by the 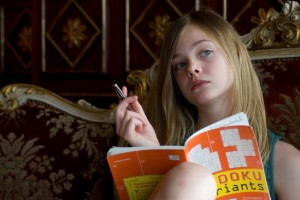 press on their favourite colour in one instant before enquiries on the postmodern malaise at the heart of their latest project come next. The opening visual motif of moving in circles, of being in a rut, is re-purposed in the final frames with a new aspiration in life for the reinvigorated Johnny, a conclusion that surprisingly ignited a round of applause at the festival screening I attended. An existential comedy with a skewed vision of the cult of celebrity, Somewhere knows where it is, and those that find it will be glad they did.