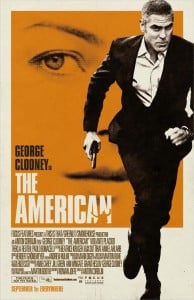 Following on from his critically acclaimed debut, Control director Anton Corbjn has graduated to the big leagues and recruited one of the world’s biggest stars to anchor his sophomore feature, a paranoid tale of deception and suspicion that is dripping with an Antonioni-inspired sense of wearying ennui, any punters expecting a brisk action packed blueprint will surely be exiting the theatre and angrily demanding their money back. Purveyors of the cultivated crime film, however, those enthusiasts of sequences where characters intensely discuss the velocity of  mercury tipped explosive rounds, of those who debate the relative merits of various firearm suppressor designs or the specific qualities of Polish rifle-sights, will find a lot to admire in this unusual blend of art-house sensibilities and the histrionic Hollywood thriller. Although it suffers from a depressingly conventional final arc, The American is an appealing addition to the hit-man genre, and serves as further evidence (if it were needed) that George Clooney is not afraid to tamper with his leading man image.

Clooney is Jack, a bespoke supplier and advisor to a secretive European network of professional assassins. His activities have clearly upset some local goons whom attempt a hit of their own as Jack relaxes with his girlfriend in a remote Swedish cabin, an operation which is no match for his superior skills which illustrate that he is no stranger to performing some chilling efficient wet-work of his own. Fleeing to a pastoral Italian village on the instructions of his contact Pavel (an etched Johan Leyson) Jack agrees to one final job whilst also falling for the suspicious charms of local call-girl Clara (Violante Placido) in one final, desperate  attempt at human contact and potential redemption. Clooney certainly is the American in this film as he is surrounded with a retinue of contacts, handlers and criminal figures who appear to have strutted off the pages of the latest Vogue Paris catwalk edition. The film is populated with a cortege of beautiful foreign actresses whose studied professionalism is affiliated with Jack’s sententious behaviour. His final contract concerns the crafting of a weapon and ammunition for the frosty Mathilde (Thekla Reuten), a liquidator whose current assignment remains shrouded in mystery.

An unnerving sense of anxiety permeates The American from its opening frames to final conclusion as Jack is constantly monitoring his environment for potential threats. It’s a very internal portrayal of angst-ridden apprehension which sits in marked contrast with Clooney’s fantastic Oscar-nominated performance in Michael Clayton. Our anti-hero is clearly engaged in a titanic internal struggle and a desire to escape the life, but by the same token you are not left with the impression that this is a good man enmeshed in an infernal world of spooks, murder and treachery, as a surprise adumbration in the opening sequence clearly signals Jack’s mercenary credentials. Corbjin’s wealth of experience in crafting dozens of visually arresting music videos over his twenty-five year career pays dividends and the chilly photography of the Italian countryside is exquisite. Much of the film’s cool and distanced aura is undone, however, with a perfectly predictable text-book conclusion which detracts from the previous 100 minutes of carefully constructed and beautifully composed semiotics, and an implausible relationship with a local priest bleeds into a clumsy butterfly metaphor that staggers when it should soar as the titles begin to spool. The American is an interesting mesh of the European art film and its melancholy draped environments, an affectation that does not comfortably intertwine with its final action beats and one is left feeling that if only it had the conviction to maintain its ethos an inevitable reputation as a cult film curio could have been eclipsed with something like an unexpected classic.