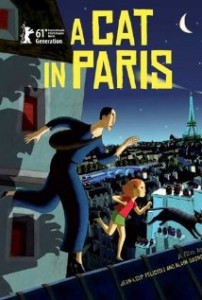 A Cat in Paris

As contentious as every Oscar inevitably is, one of the few areas of consistency is in the Best Animated Feature category (and perhaps the Best Documentary Feature). The 84th Academy Awards saw five worthy candidates, including France’s A Cat in Paris, and although it certainly merits a nomination, the film lacks the form of its fellow contenders. Animated with artistry and distinct visual appeal, A Cat in Paris never truly actualizes its self-imposed expectations.

In Paris, a cat named Dino leads an auspicious double life. By day, Dino is the loyal, loving pet of Zoé (Oriane Zani), a young taciturn little girl. By night, Dino becomes an accomplice to Nico (Bruno Salomone), a prolific cat burglar that roams the rooftops of the city.

During one fateful night on the prowl, Dino inadvertently causes the acquaintance between the two, and when Zoé falls into the clutches of a dangerous gangster, Victor Costa (Jean Benguigui), Nico, Dino, and Zoé’s police officer mother, Jeanne (Dominique Blanc) must try to rescue her.

The film’s opening scene, which shows Nico amidst one of his robberies, immediately sets the tone of the film. Imagery wise, the sequence itself is par for the course. A living, breathing incarnation of a children’s novel, the film’s pastel 2-D animation is nostalgic and evocative.

The film’s later blackout sequence, where the character silhouettes are contrasted against pitch-black darkness, is truly inspired. Sleek and dulcet, the film’s visuals are compelling, but it never truly transcends its novelty – save a couple of sequences, like the aforementioned.

But what does stand out, for better or for worse, is the movie’s non-diegetics. With a driving, orchestral score interspersed with periodically jazzy interludes, the film creates an atmosphere conducive to a film noir or a gripping suspense thriller, à la Bernard Hermann or Hans Zimmer (the score during the rooftop sequences, in particular, brings to mind The Dark Knight).

However, the story itself is highly accessible. As the film starts to coalesce, we come to expect more twists, turns, and stratagem, but what it amounts to is somewhat disappointing. Neither gripping nor gritty, A Cat in Paris plays out as a fairly conventional caper.

Perhaps it’s unfair to demand more from a briskly paced, 70-minute affair, but because the film’s score foreshadows a tone of narrative intrigue, anything less is a severe let down.

As it is, A Cat in Paris is a great introduction to a more mature form of storytelling for the younger set, but for adults, the film is a water-downed, albeit visually vibrant, animated thriller.